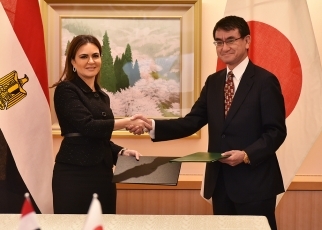 1. On December 18, Mr. Taro Kono, Minister for Foreign Affairs, and Dr. Sahar Nasr, Minister of Investment and International Cooperation of the Arab Republic of Egypt, exchanged notes concerning the “Project for Procurement of Education and Research Equipment for Egypt-Japan University of Science and Technology (E-JUST) (Phase 2),” a grant aid project of up to 993 million yen, in Tokyo. The plan to provide this grant aid was conveyed to H.E. Mr. Abdel-Fattah El-Sisi, President of Egypt, by Minister Kono when he visited Egypt in September this year.

2. The Government of Egypt requested Japan’s support for implementing more practical training in education, which centers on classroom learning-based theory. Based on an agreement between the two countries’ governments that was concluded in 2009, the Government of Japan is undertaking support for improving the educational and research capabilities at E-JUST. This grant aid will provide education and research equipment for use in the third and fourth year courses at E-JUST’s engineering department, which opened in September 2017, and follows on from Phase 1 (equipment for use in the first and second year courses), for which an exchange of notes took place in July 2016.

3. This grant aid will strengthen the foundation of E-JUST as a leading educational institution, and make it possible for the approximately 2,000 students enrolled at its engineering department to receive Japanese-style engineering education, which attaches importance to small class numbers, practice and research. It is expected to contribute to realizing sustainable economic growth and job creation through the development of industrial human resources.

4. Japan pledged to promote cooperation in the education field as a result of the Egypt-Japan Education Partnership (EJEP) (PDF)

, which was announced in February 2016 when President El-Sisi paid an official visit to Japan. In addition, at the Sixth Tokyo International Conference on African Development (TICAD VI) held in August of the same year, it pledged to support human resources development that focused on the science, technology and industrial fields through high quality higher education (PDF)

. This grant aid will realize those pledges.