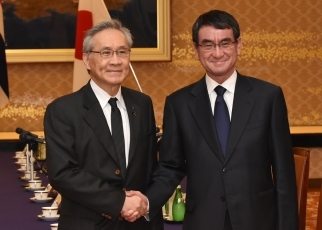 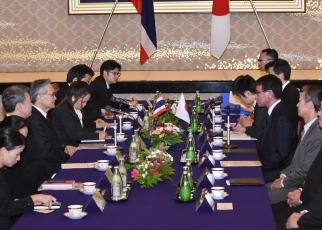 On September 25, for approximately 30 minutes, from 7:15 p.m. Mr. Taro Kono, Minister for Foreign Affairs of Japan, held a foreign ministers’ meeting followed by a dinner, with H.E. Mr. Don Pramudwinai, Minister of Foreign Affairs of the Kingdom of Thailand. The overview of the meeting is as follows.

2. Minister Kono explained that Mr. Iwao Horii, Parliamentary Vice-Minister for Foreign Affairs, is to visit Thailand from September 25 and attend events to be held in Thailand commemorating the 130th anniversary of Japan-Thailand diplomatic relations. The minister referred to the close bilateral cooperation in the areas of security and economy, further welcomed their cooperative work for the Mekong region including through the development of Dawei, Myanmar, and the triangular cooperation in and the fisheries area. He also explained to the “Free and Open Indo-Pacific Strategy” and stressing the importance of the maritime order based on law and expressed his wish to work together with Thailand. In this regard, Minister Don stated that in addition to cooperation on these items, he believed that further concrete results could be achieved by Japan and Thailand with regard to the development of Myanmar and its strategies as well as the improvetment of infrastructure and transportation networks in ASEAN. He stated that the two countries can further contribute to regional development, human resources development, and the development of regional rules since Japan had the Japan-Mekong Cooperation framework and Thailand chaired the Ayeyawady-Chao Phraya-Mekong Economic Cooperation Strategy (ACMECS).

3. With regard to regional affairs, Minister Kono stated his view that North Korea posed a major problem and that the implementation of the related UN Security Council resolutions is of critical importance. He stressed the importance of strengthening regulations by Southeast Asian countries and requested Thailand’s cooperation. The Minister further expressed to work closely together with Thailand to issue a powerful message regarding North Korea and maritime security in the ASEAN-related Summit Meetings in November. Minister Don explained that Thailand was in strict compliance with the UN Security Council resolutions regarding North Korea and that it was taking measures beyond the resolutions. The Ministers also exchanged views on the situation in Rakhine State in Myanmar.

4. At the dinner followig the meeting, the Ministers further discussed matters including people-to-people and cultural exchanges between Japan and Thailand, in a congenial atmosphere.