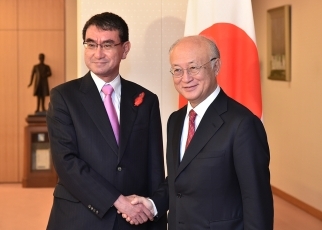 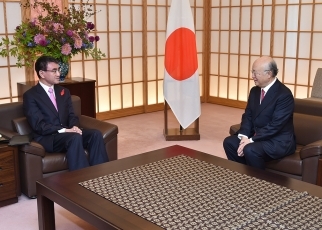 On October 3, commencing at around 12:00 p.m. for approximately 15 minutes, Mr. Taro Kono, Minister for Foreign Affairs, held a meeting at the Ministry of Foreign Affairs with Mr.Yukiya Amano, Director General of the International Atomic Energy Agency (IAEA). The outline of the meeting is as follows.

2. Minister Kono appreciated the IAEA’s efforts with regard to North Korea’s nuclear issue, and explained that Japan is paying close attention to the situation of North Korea and will continue to support the IAEA’s efforts under Director General Amano, which include enhancing readiness toward the resumption of verification activities in North Korea.

3. Minister Kono conveyed to Director General Amano that this time Japan decided to contribute 1 million euros to the IAEA’s Renovation of the Nuclear Applications Laboratoriesproject. In response, Director General Amano expressed his gratitude for Japan’s support, explaining that the IAEA intends to continue to provide support on measures dealing with the aftermath of the Fukushima Daiichi Nuclear Power Station accident.

4. In addition, the two sides exchanged views on issues such as the North Korea’s nuclear issue, the Iran nuclear deal, and towards the 2020 Tokyo Olympic and Paralympic Games. They confirmed that Japan and the IAEA will coordinate and cooperate further in the future.

(Reference 1) The International Atomic Energy Agency (IAEA)
(1) An international organization that was established in 1957 for the purposes of promoting the peaceful use of nuclear energy and preventing its diversion for military purposes, based on the IAEA Statute. (It currently has 169 Member States).

(2) Director General Amano was appointed as the Director General in December 2009 and is currently serving in his second term. His reappointment was approved at a General Conference in September this year.

(2) The laboratories are bases for research and development and human resources development in the field of nuclear applications.