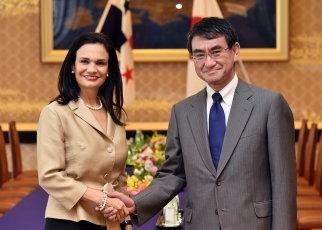 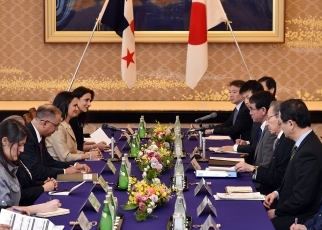 On March 1, commencing at 12:00 p.m. for approximately 1 hour and 20 minutes, Mr. Taro Kono, Minister for Foreign Affairs, held a meeting with H.E. Mrs. Isabel Cecilia de Saint Malo de Alvarado, Vice-President and Minister of Foreign Affairs of the Republic of Panama, who is visiting Japan as an official guest of the Ministry of Foreign Affairs. The overview of the meeting is as follows.

1.
(1) In his opening remarks, Minister Kono welcomed Vice President Saint Malo on her first visit to Japan and stated that he looked forward to holding a comprehensive policy dialogue with her as Japan and Panama are important partners who share the fundamental values, such as democracy, the market economy, and the rule of law, and also enjoy close economic relations.

(2) On bilateral relations, Minister Kono stated that important agreements were reached relating to ODA loan for the Panama Metropolitan Area Urban Transportation Line-3 Development Project and the Tax Information Exchange Agreement between the Government of Japan and the Government of the Republic of Panama among others on the occasion of President Varela’s visit to Japan last year and that the matters agreed to are being steadily implemented. Furthermore, Minister Kono said that, since Japan is one of the main users of the Panama Canal, he expects close consultations with Panama, and expressed his desire to work together with Panama for the development of the entire Latin America and the Caribbean region.

2.
(1) In response, Vice-President Saint Malo stated that Japan and Panama have a diplomatic relationship that goes back more than a hundred years, that democracy has taken root in Panama, that Panama shares the common value of the market economy with Japan as well, and that Panama intends to continue to cooperate with Japan in various areas going forward.

(2) With regard to the bilateral relations, Vice-President Saint Malo stressed the importance of the ODA loan for the Panama Metropolitan Area Urban Transportation Line-3 Development Project, expressed gratitude for Japan’s support in enhancing Panama’s financial transparency through such means as the entry into force of the tax information exchange agreement, and stated that the increased use of the Panama Canal by Japan symbolizes the good relationship between the two countries.

(3) Furthermore, regarding the state of affairs in North Korea, Vice-President Saint Malo strongly rejected the recent acts of provocation by North Korea, such as the launch of ballistic missiles, and expressed the solidarity with Japan, as a country that promotes peace.

3. Regarding regional affairs, Minister Kono stated that the outrageous and provocative act by North Korea of launching a ballistic missile flying over Japan is absolutely unacceptable and expressed Japan’s intention to maintain solidarity with Panama and the rest of the international community. Minister Kono and Vice-President Saint Malo also exchanged views regarding the states of affairs in East Asia and in Venezuela among other matters.