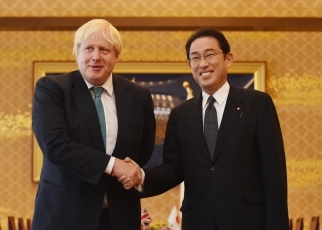 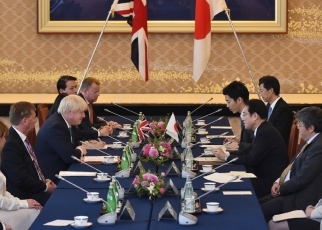 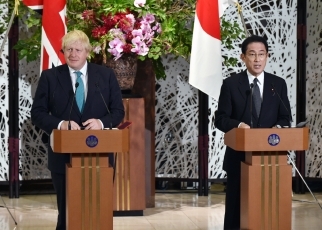 On July 21 from 11:40 a.m. for approximately 75 minutes, Mr. Fumio Kishida, Minister for Foreign Affairs of Japan, held the Sixth Japan-UK Foreign Ministers’ Strategic Dialogue with the Rt. Hon. Boris Johnson MP, Secretary of State for Foreign and Commonwealth Affairs of the U.K., who is currently visiting Japan, in the form of a meeting and a working lunch. The overview of the dialogue is as follows.

(1) Minister Kishida stated that Japan and the U.K. were global strategic partners that share fundamental values and that given the rules-based international order is facing challenges in various forms, including the nuclear and missile development by North Korea and the situations in the East China Sea and the South China Sea, he hoped that Japan and the UK would cooperate to exercise leadership in order to maintain a free and open international community.

(1) The two ministers highly valued the implementation of joint exercises by Japan, the United Kingdom, France, and the United States in May this year. Minister Kishida welcomed the approval of the Japan-U.K. ACSA (Acquisition and Cross-Servinc Agreement) by the Diet and the Parliament in both countries as the agreement would underpin the promotion of security and defense cooperation, and expressed his wish for its early entry into force.

(2)Regarding capacity-building assistance for developing countries, the two ministers welcomed the recent achievements of Japan-UK collaboration to clear landmines in Angola and in the field of “preventing sexual violence in conflict” in Senegal, and agreed to continue to promote these kinds of collaboration.

(3) The two ministers confirmed that they would promote their cooperation in the area of cybersecurity, looking ahead to the Tokyo Olympic and Paralympic Games.

(3) In response, Secretary Johnson stated that exit from the EU does not mean U.K.’s exit from Europe and that the United Kingdom would continue to maintain a close cooperative relationship with the EU. The Secretary also said that the United Kingdom would listen to and consider the voices of concern from Japanese companies, and appreciated the suggestions from Japan regarding the withdrawal negotiations.

(1) Regarding North Korea, the two ministers shared the understanding that, given the ballistic missile launch by North Korea on July 4, what would be needed now was not dialogue but stronger pressure on North Korea, and that the role of China was critical. Moreover, Minister Kishida asked for understanding and cooperation toward the early resolution of the abductions issue, for which he obtained Secretary Johnson’s support.

(2) Regarding the East China Sea and the South China Sea situations, the two ministers agreed to continue to cooperate closely in order to maintain the international order based on the rule of law.

(3) In addition, the two ministers exchanged views on Russia, East Asia, and the situations in the Middle East.