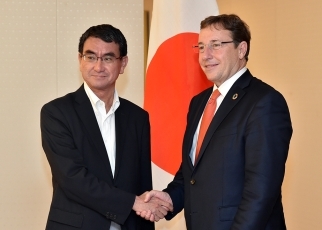 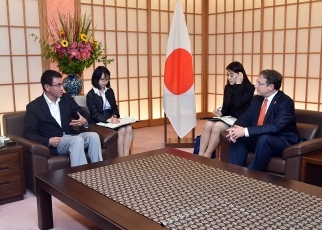 On August 10, commencing at 7:10 p.m. for approximately 20 minutes, Foreign Minister Taro Kono received a courtesy call from Mr. Achim Steiner, Administrator of the United Nations Development Programme (UNDP). The overview of the courtesy call is as follows.

1. Foreign Minister Kono offered his congratulations on Mr. Steiner’s appointment as the Administrator of the UNDP and welcomed Mr. Steiner’s first visit to Japan after the appointment. Foreign Minister Kono stated that Japan places great significance on the Sustainable Development Goals (SDGs) and is proactively making efforts for implementing them both domestically and abroad by establishing the “SDGs Promotion Headquarters” headed by Prime Minister Abe, and involving a wide-range of stakeholders in those efforts, including the formation of the Parliamentary League for Promoting the SDGs.

2. In response, Mr. Steiner stated that Japan’s efforts for promoting the SDGs are highly valued, especially, in terms of working on both international cooperation and domestic actions under the Headquarters, and the partnership with the private sector is particularly impressive. Both sides agreed to advance cooperation and collaboration in these areas.

3. Foreign Minister Kono stated that he regards UNDP as an important international organization for promoting development issues at the United Nations, and that he expects visible outcomes in making UNDP further efficient, proactively recruiting and promoting Japanese staff including at the senior level, and advancing further partnership in the areas that Japan attaches great importance to, such as health, disaster risk reduction and women’s empowerment. Mr. Steiner responded that he will seriously take Foreign Minister Kono’s points into consideration and firmly translate them into action.