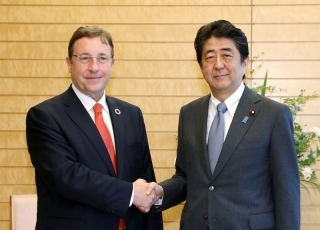 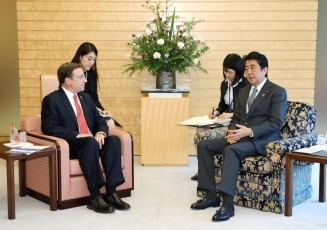 On August 10, commencing at about 11:35 a.m. for approximately 20 minutes, Prime Minister Shinzo Abe received a courtesy call from Mr. Achim Steiner, Administrator of United Nations Development Programme (UNDP), who is visiting Japan. The overview of the courtesy call is as follows.

1. Prime Minister Abe offered his congratulations on Mr. Steiner’s appointment as the Administrator of UNDP, and welcomed his first visit to Japan since the appointment. Prime Minister stated that Japan places great significance on promoting the Sustainable Development Goals (SDGs) and established the “SDGs Promotion Headquarters,” headed by the Prime Minister himself, and that he hopes to advance partnership between Japan and UNDP in the areas such as African development, health, disaster risk reduction, women’s empowerment, under the concept of human security that Japan is leading.

2. In response, Mr. Steiner stated that he highly values Japan’s efforts for promoting the SDGs and Prime Minister Abe’s leadership in this regard, and expressed his gratitude to Japan’s contributions to UNDP and the other UN development organizations, while hoping to further expand the partnership between Japan and UNDP in the priority areas which Prime Minister Abe pointed out, and to achieve visible outcomes.

3. Prime Minister Abe expressed his intention to continue to cooperate with UNDP for the success of the 7th Tokyo International Conference on African Development (TICAD7) as co-organizers, which will be held in 2019, and stated that he expects UNDP to further strengthen cooperation with Japan International Cooperation Agency (JICA), Japanese NGOs and companies.

4. In response, Mr. Steiner appreciated Japan’s initiative in African development with a reference to the openness of TICAD, and stated that he wishes to participate in TICAD7 in 2019 for which he intends to cooperate with Japan for the success. Mr. Steiner also stated that the partnership between Japan and UNDP, including cooperation with Japanese NGOs and companies, have contributed to the regional stability and prosperity, and thus carries great values that are geopolitical, strategic and humanitarian; therefore he wishes to emphasize these values internally and externally in order to further advance the cooperation and partnership.