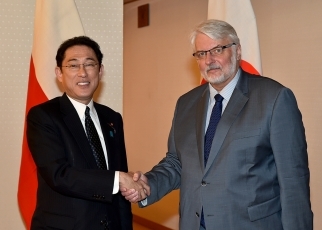 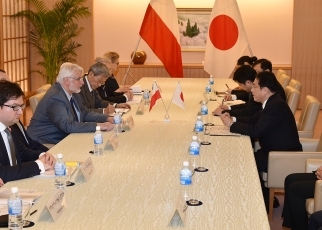 ) which specifies the goals to be implemented in concrete terms for the years 2017 - 2020 in a broad range of fields such as politics, economy, science-technology and culture, based on the strategic partnership relationship that was established between Mr. Shinzo Abe, Prime Minister of Japan, and H.E. Mr. Bronisław Komorowski, then President of Poland, in 2015.

1. Bilateral relations
At the beginning, the two ministers welcomed that they held the foreign minister’s meeting on the memorial day, May 18, which marks the 60th anniversary of the re-establishment of diplomatic relations between Japan and Poland, and signed the “Action Plan for the Implementation of the Strategic Partnership” as strategic partners sharing fundamental values.

In addition, the two ministers confirmed that cooperation will be strengthened in a broad range of fields such as politics and economy on the basis of this Action Plan, and shared the view that the two countries will cooperate more closely in order to celebrate the milestone of the 100th anniversary of the establishment of diplomatic relations in 2019.

The two ministers concurred that it will be important to promptly reach an agreement in principle on the Japan-European Union (EU) Economic Partnership Agreement (EPA). Minister Kishida also asked for consideration to Japanese companies in Poland after the Brexit.

3. International affairs
The two ministers exchanged views on the East Asia situation, and shared the view in particular that it is important for the international community as a whole to increase pressure on North Korea, to urge North Korea to completely fulfill the relevant United Nations Security Council (UNSC) resolutions, and the abductions issue to be promptly resolved. Japan and Poland will continue to discuss these issues closely.