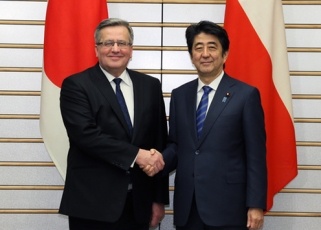 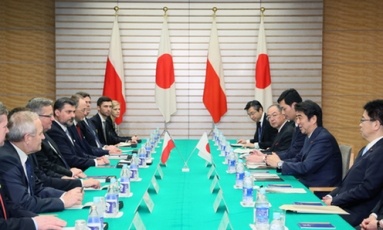 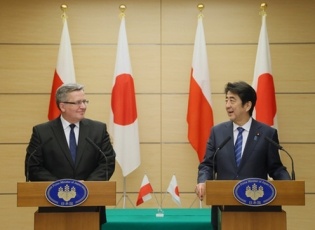 On February 27, commencing at 6:10 p.m. for approximately 45 minutes, Prime Minister Shinzo Abe held a summit meeting with H.E. Mr. Bronisław Komorowski, President of the Republic of Poland, during his working visit to Japan. The overview of the meeting is as follows.

After welcoming President Komorowski’s visit to Japan, Prime Minister Abe stated that Poland is “the leading country of Central and Eastern Europe,” which shares fundamental values such as freedom, democracy and human rights with Japan, and expressed his intension to upgrade the relationship to the strategic dimension as an important partner for addressing global issues.

In response, President Komorowski expressed his gratitude for this visit, and stated that Poland will strengthen the strategic partnership with Japan.

In response, President Komorowski reiterated his support for the Japan-EU EPA.

Following this, Prime Minister Abe expressed his gratitude for the sympathy and solidarity from Poland over the hostage incident in Syria. He also explained that Japan will never give in to terrorism, and that Japan will continue to steadfastly fulfill its responsibility in the international community to combat terrorism.

In response, President Komorowski once again extended his condolences over the hostage incident, and appreciated Japan’s firm stance against terrorism.

President Komorowski stated that Poland supports the ceasefire agreement and implements support to Ukraine. He also expressed his gratitude for Japan’s assistance to Ukraine.

Prime Minister Abe stated that approximately 300 Japanese companies have expanded their business to Poland, and emphasized the importance of infrastructure development within Poland for further investment.

Additionally, the two leaders shared the view that the two countries will continue to cooperate in energy sector, including the promotion of highly effective coal-fired thermal power generation.

(1) Following the summit meeting, the Joint Statement between Japan and Poland “Building Framework for Strategic Partnership for Freedom, Growth and Solidarity” (PDF)

) was signed. The revised Memorandums on Strengthening Mutual Cooperation between the Japan External Trade Organization (JETRO) and the Polish Information and Foreign Investment Agency (PAIiIZ) was also exchanged.

(3) At the end, Prime Minister Abe and Mrs. Abe hosted a dinner in a friendly atmosphere, and exchanged views on a wide range of bilateral topics, including cultural exchanges.