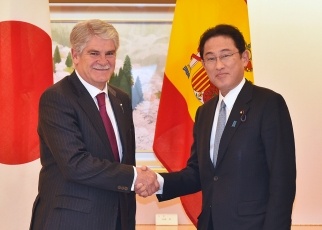 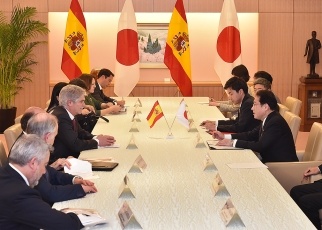 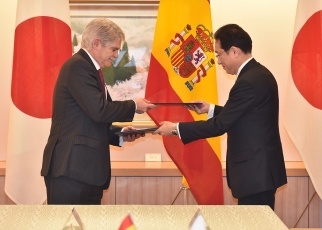 On April 5, commencing at 4:15 p.m. for approximately 30 minutes, Mr. Fumio Kishida, Minister for Foreign Affairs, held a foreign ministers’ meeting with H.E. Mr. Alfonso Dastis, Minister of Foreign Affairs and Cooperation of the Kingdom of Spain, who is visiting Japan on the occasion of the State Visit to Japan by His Majesty the King Felipe VI and Her Majesty the Queen Letizia of Spain. The overview of the meeting is as follows.

1. At the beginning, Minister Kishida welcomed Minister Dastis on his first visit to Japan, and stated that the signing of an Agreement between Japan and Spain regarding a Working Holiday Scheme was an important outcome of this visit. In response, Minister Dastis stated that he was happy to be able to visit Japan on the occasion of the State Visit to Japan by His Majesty the King and Her Majesty the Queen, and hoped to use this opportunity to further deepen bilateral relations. The two ministers shared the view that they would deepen cooperation in a broad range of fields toward the 150th anniversary of the establishment of diplomatic relations in 2018.

2. With regard to the situation in Europe, Minister Kishida expressed support for European integration to continue to be powerfully promoted in the future. The two ministers shared the view that they would cooperate to realize an agreement in principle on the Japan-European Union (EU) Economic Partnership Agreement (EPA) as early as possible.

3. In addition, the two ministers shared the recognition on the severe security situation in the Asia-Pacific, including North Korea, which again fired a ballistic missile on the morning of April 5, and confirmed they would cooperate closely in responding to regional issues.