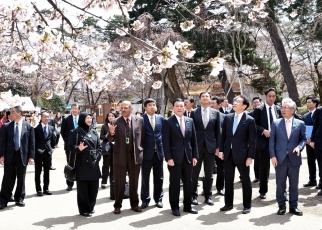 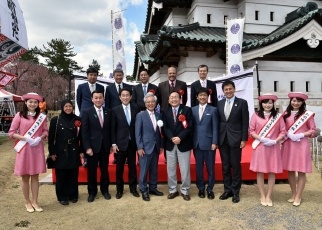 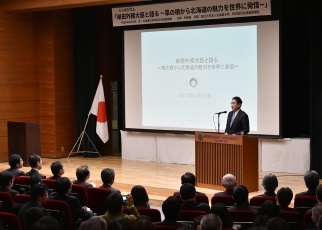 (1) Attendance in opening ceremony for the Hirosaki Cherry Blossom Festival
On the morning of April 22, Minister Kishida attended the opening ceremony for the Hirosaki Cherry Blossom Festival in Hirosaki Park in Hirosaki City. Together with local dignitaries and the diplomatic corps in Japan invited to the visit, Minister Kishida celebrated the opening of the Festival, an event with a long history, for its 100th anniversary this year in full view of the beautiful cherry blossoms. Minister Kishida took the occasion to refer to the recently-announced relaxation of multi-entry visas for Chinese tourists to three Tohoku Region prefectures including Aomori, to which local dignitaries including Mr. Shingo Mimura, Governor of Aomori Prefecture, expressed their gratitude.

(2) Lunch discussion with the diplomatic corps in Japan
On the afternoon of April 22, Minister Kishida had lunch at Fujita Memorial Japanese Garden with the diplomatic corps in Japan together with Mr. Shingo Mimura, Governor of Aomori Prefecture, and Mr. Noriyuki Kasai, Mayor of Hirosaki City, where they exchanged views on how to market Aomori Prefecture’s products and sightseeing resources overseas and how to attract overseas tourists there, among other matters.

(3) Visit to Aomori City
On the afternoon of April 22, guided by Mr. Akihiko Onodera, Mayor of Aomori City, Minister Kishida, joined by the diplomatic corps, visited Taisei Kogyo Co., Ltd. in Aomori City where the company representatives conducted a presentation on its cutting-edge controlled freezing point storage technology. Minister Kishida and the diplomatic corps observed agricultural products that had been preserved using the technology. Later, they visited the Nebuta Museum WA-RASSE, a cultural and tourist exchange facility of Aomori City.

(6) Visit to Hachinohe Port, Itsukushima Shrine (Benten-jima), etc.
On the morning of April 23, Minister Kishida visited the Tatehana Quay Morning Market guided by Mayor Kobayashi and others. Minister Kishida also visited the Itsukushima Shrine, where Mr. Jun Furusato, Director of the Hachinohe City Museum, explained on the torii gateways that were washed out to sea by the Great East Japan Earthquake disaster and drifted all the way to the State of Oregon in the United States from where they were returned and are now renowned as a symbol of the friendship between Japan and the United States.

At the symposium, after remarks from Parliamentary Vice-Minister Takei and Dr. Toyokazu Nawa, President of Hokkaido University, on behalf of the co-sponsors, Minister Kishida delivered the keynote address on grassroots international cooperation and conveying the attractiveness of Hokkaido. In the address, Minister Kishida touched on exchanges between Russia and Hokkaido and also explained the undertakings of the Government of Japan concerning Japan-Russia relations.

(3) Courtesy call on Minister Kishida by Hokkaido Governor Harumi Takahashi
Following the symposium, Minister Kishida received a courtesy call from Governor Takahashi for an exchange of views regarding the joint economic activities on the Four Northern Islands and economic exchanges between Japan and Russia and to hear requests from Hokkaido in this respect.

(4) Discussions with foreign and Japanese students
On the afternoon of April 23, Minister Kishida had a discussion with five foreign and Japanese students from Hokkaido University. The students expressed a variety of opinions directly to Minister Kishida regarding how to communicate effectivelythe attractiveness of Hokkaido to the world. The members actively shared their views in a warm atmosphere.

Reference: Names of the countries (six in all) of the diplomatic corps in Japan that accompanied Minister Kishida
Myanmar, India, Thailand, Brunei Darussalam, Republic of Korea, Vietnam