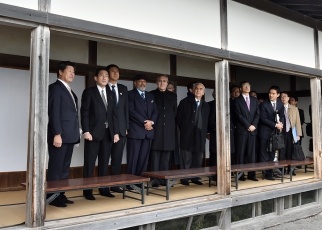 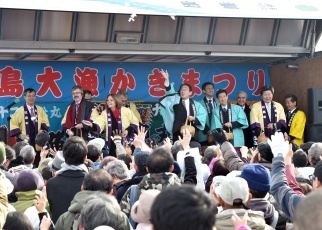 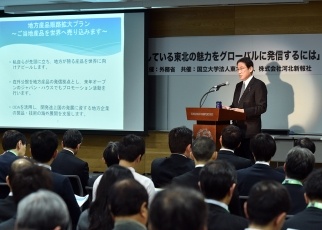 On November 23, Mr. Fumio Kishida, Minister for Foreign Affairs, visited Miyagi Prefecture with foreign diplomats stationed in Japan from seven countries as part of a new initiative titled the “Local to Global” Project that aims to promote the attractiveness of regional areas of Japan worldwide. During the visit, Minister Kishida expressed sympathy to local residents who were affected by the earthquake that struck the Tohoku area on November 22 and stated that the Ministry of Foreign Affairs intends to further promote international disaster risk reduction cooperation in light of the results from the UN World Conference on Disaster Risk Reduction held in Sendai in March 2015. The significance of the visit to Miyagi Prefecture and an overview of the events are described below. Mr. Shunsuke Takei, Parliamentary Vice-Minister for Foreign Affairs, was also present at all of the events.

(1) In this project, Minister Kishida visited regional areas in Japan with foreign diplomats stationed in Japan to share the attractiveness of the regions, engage in dialogue with local people, and promote regional appeals to the world, with the aim of connecting Japan’s regional areas with the world and further vitalizing these areas.

(2) The visit to Miyagi Prefecture offered an opportunity to promote key local products, such as oysters, and regional attractions, such as Zuiganji Temple, to the world and deepened discussions that should help promote tourism to Japan and global interaction through direct dialogue with a variety of people, including the Mayor of Sendai, the Deputy Governor of Miyagi Prefecture, representatives from the business community and universities in Miyagi, and students in the area.

(3) During the symposium held at Tohoku University, Minister Kishida announced a new Action Plan for promoting local appeals to the world based on three core initiatives – expansion of sales channels for regional products, promotion of tourism in Japan, and acceleration of global interactions.

Overview of each event

(1) Participation in the Matsushima Oyster Festival in Isojima Island
Minister Kishida participated in the 10th Matsushima Oyster Festival in Isojima Island held in Isojima, Isozaki District, Matsushima Town on the morning of November 23. He made remarks, participated in mochimaki (give-away of rice cakes) to pray for the earthquake disaster reconstruction together with foreign diplomats, Mr. Koichi Sakurai, Mayor of Matsushima Town, and others, and interacted with local residents while eating oysters by the fireside at the events and promoted local appeals.

(2) Visit to Zuiganji Temple
Minister Kishida subsequently visited Zuiganji Temple (Matsushima Town, Miyagi) with the accompanying foreign diplomats stationed in Japan, and received an explanation of the Temple from Mayor Sakurai and Zuiganji Temple monks while walking along the approach path and viewing the main hall.

(3) Shared views and held discussions with foreign diplomats stationed in Japan at Kanrantei
Next, Minister Kishida shared views and held discussions with accompanying foreign diplomats stationed in Japan on the theme of “Japan’s local appeals from the standpoint of ambassadors” at Kanrantei in Matsushima Town. Mayor Sakurai hosted this event. Ambassadors in attendance commented that they recognized the appeal of Matsushima, which they visited on the day and offered opinions on ways of effectively communicating the beautiful nature and culture of regions such as Matsushima to other countries.

(5) Symposium “Dialogue with Foreign Minister Fumio Kishida: Delivering a Message to the World about the Attractiveness and the Strong Recovery of Tohoku” (Slide of the keynote speech (PDF)

Minister Kishida attended the symposium “Dialogue with Foreign Minister Fumio Kishida: Delivering a Message to the World about the Attractiveness and the Strong Recovery of Tohoku” held at the Katahira Campus of Tohoku University during the afternoon.

At the symposium, Parliamentary Vice-Minister Takei provided opening remarks and then Minister Kishida delivered the keynote speech “Delivering a Message to the World about the Attractiveness and the Strong Recovery of Tohoku” (English (PDF)

) in which he announced a new Action Plan for promoting local appeals to the world based on three core initiatives – expansion of sales channels for regional products, promotion of tourism in Japan, and acceleration of global interactions. A panel discussion and Q&A session followed the speech.

Participants for the panel discussion were Mr. Susumu Satomi, President of Tohoku University, Ms. Emiko Okuyama, Mayor of Sendai City, Mr. Hiroki Iwasa, Representative Director & CEO of GRA Inc., Minister Kishida, and Parliamentary Vice-Minister Takei. The discussion was vibrant and offered many valuable suggestions. Opinions included “Tohoku is full of appealing contents and needs to find ways of effectively leveraging and communicating it,” “It is important for various players, including the national government, local government entities, academic institutions, and companies, to cooperate to promote the area’s appeal,” and “Tohoku should proactively learn from the opinions of foreigners who find the area appealing.” Additionally, participants asked about “how to deal with reputational damage” and “how to increase the number of foreign visitors.” Lively Q&A took place, including some comments that elicited friendly laughter.

(6) Discussions with foreign and Japanese students
After the symposium, Minister Kishida held discussions with about 10 foreign and Japanese students from Tohoku University. The students directly expressed a variety of opinions they had regarding the appeals of Tohoku and Japan and ways of effectively communicating such appeals to the world from the standpoint of Japanese students with experience of living abroad and foreign students from various countries. Their ideas include experience-based tours in which foreigners engage in an actual experience such as farming and fishery in Tohoku and delivering videos of the daily lives of residents in Tohoku. The members actively shared opinions in a warm atmosphere.

Reference 3: Zuiganji Temple
The temple was originally founded as Tendai-shu Enfukuji in 828 by Jikaku Daishi. It is the family temple of feudal load Date Masamune. Current structure built in 1609, and Masamune rebuilt it in five years.

Reference 4: Kanrantei
Kanran means watching ripples in the water. Kanrantei is said to have been a tea house in Toyotomi Hideyoshi’s Fushimi Momoyama Castle that was moved to the Edo Hantei by Date Masamune and then was brought to Matsushima by his son Date Tadamune by ship.

The building faces the southeast and has a shingled roof and two 18-tatami-mat rooms with tatami mats with decorative edges. It has a hipped roof and is a simple and light-feeling structure. Kanrantei is a cultural property for the prefecture.

The Tokonoma’s wall paintings and fusuma paintings use vibrant colors and were created by Sendai-Han artist Shuri Sakuma. They are national important cultural properties.