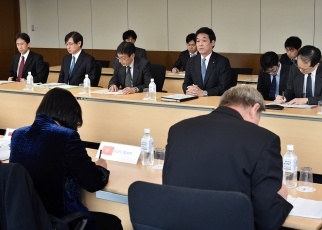 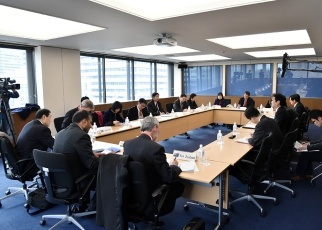 On February 24, commencing at 3:00 p.m. for approximately 60 minutes, Mr. Kentaro Sonoura, State Minister for Foreign Affairs, received a group courtesy call from the chief negotiators for the Regional Comprehensive Economic Partnership (RCEP), who are visiting Japan for the 17th round of negotiations for RCEP. The overview of the meeting is as follows:

1. State Minister Sonoura welcomed the visit to Japan by the chief negotiators for RCEP, and stated that it has become even more important to develop common rules for free and fair trade and investment amid growing protectionism worldwide. Furthermore, Minister Sonoura expressed his high hopes that the 17th round of negotiations, which will be held in Kobe City, will yield progress towards the early conclusion of a high-quality agreement.

2. In response, Mr. Iman Pambagyo, Director General of International Trade Negotiation, Ministry of Trade of the Republic of Indonesia, who is the RCEP chairman, on behalf of the delegation, expressed gratitude for the thorough preparation of this round of negotiation by Japan and stated that the participant countries should strive for the high-quality substance in order to realize a commercially meaningful agreement. He stated that it is important to accelerate the negotiation for the conclusion this year, and in this sense expressed his expectation of progress in this round of negotiation in Kobe.

3. There were similar remarks from chief negotiators of other countries and they agreed to make collective efforts to push the negotiations further under the circumstance that the importance of RCEP draws worldwide attention.

(3) Modality of market access negotiations was agreed in the third Ministerial Meeting in August 2015 (in Malaysia) and substantial market access negatiations were started in 3 areas (Goods, Trade in Services and Investment). Also, negotiations are currently being held in a wide range of areas such as Intellectual Property and Electronic Commerce.