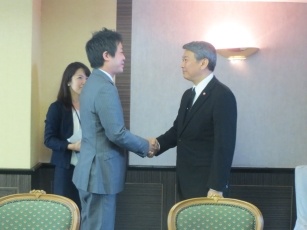 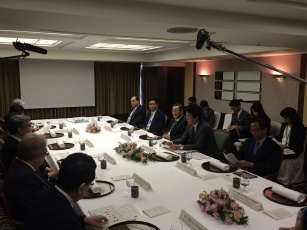 1. On December 20, Mr. Kentaro Sonoura, State Minister for Foreign Affairs, held a meeting with the ambassadors from ASEAN member countries in Tokyo.

2. Taking the opportunity of the third anniversary since the ASEAN-Japan Commemorative Summit Meeting held in December 2013, this meeting was held to demonstrate the achievements of the various measures announced by Prime Minister Shinzo Abe at the Commemorative Summit, especially those of Japan’s initiatives in the area of cultural exchange, as well as to seek to further collaborate with the ASEAN member countries in the future.

3. In his opening remarks, State Minister Sonoura emphasized the importance of ASEAN in the global economy and political frameworks of Asia, and expressed Japan’s intention to work together with ASEAN to achieve ASEAN’s economic integration. State Minister Sonoura also presented initiatives of the “WA Project” which was announced by Prime Minister Abe at the ASEAN-Japan Commemorative Summit Meeting, and asked the ambassadors for further cooperation and collaboration of their respective ASEAN member countries. In particular, with regard to the initiatives of the “WA Project”, State Minister Sonoura explained that the ASEAN Advisory Committee Members of the Japan Foundation Asia Center issued a joint statement (English (PDF)

) which highly evaluated this project.

4. In response, the ambassadors and chargés d'affaires from the ASEAN member countries actively expressed positive views on Japan’s initiatives. H.E. Mr. Bansarn Bunnag, Ambassador of the Kingdom of Thailand, on behalf of the ASEAN side, expressed gratitude for the sustained cooperation of the Government of Japan towards the formation of the ASEAN Community, and stated that people-to-people contacts and cultural exchanges between ASEAN and Japan were essential for mutual trust and confidence and expressed appreciation for various initiatives including the “WA Project”, expressing his intention to work with Japan to carry out the project.

(Reference) Regarding the “WA Project”
(1) The “WA Project” was launched by Prime Minister Abe at the ASEAN-Japan Commemorative Summit Meeting in December 2013.