Top > News > Press Releases > Japan and the UK hold Joint Workshop in Vietnam: “Navigating Towards the Free and Open Seas of Asia: The Rule of Law and International Cooperation”

Japan and the UK hold Joint Workshop in Vietnam:
“Navigating Towards the Free and Open Seas of Asia: The Rule of Law and International Cooperation” 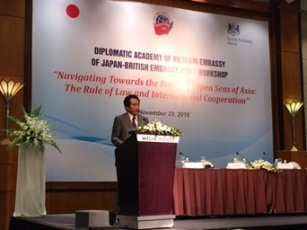 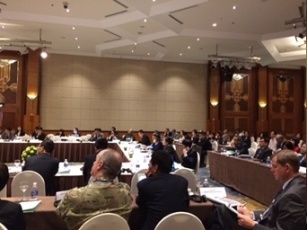 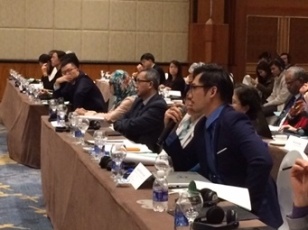 1. On 29 November, Embassy of Japan in Vietnam, British Embassy in Hanoi, and the Diplomatic Academy of Vietnam held a joint workshop in Hanoi, Vietnam, having 90 participants, entitled “Navigating Towards the Free and Open Seas of Asia: The Rule of Law and International Cooperation.”

2. The workshop analyzed the impact of July’s award in the arbitration between the Philippines and China regarding the South China Sea; shared practice on how international law had been applied among Asian countries in the past; and explored possible forms of cooperation to respect and promote the rule of law.

3. The experts participating from Japan were Foreign Press Secretary Yasuhisa Kawamura from the Ministry of Foreign Affairs, and Professor Shotaro Hamamoto from Kyoto University’s Graduate School of Law; the UK experts were Commander Ian Park of the International Law Division of the Ministry of Defence and James Farrant, Maritime Legal Adviser at the Development, Concepts and Doctrine Centre, Ministry of Defence; and the Vietnamese participants were Ha Anh Tuan, Director of Center for Policy Research, Bien Dong Maritime Institute, Diplomatic Academy of Vietnam and Nguyen Dang Thang, Member of the Vietnam Society of International Law for Vietnam.

4. Around 90 attendees from the Vietnamese government, the academic and diplomatic communities took part in the workshop, leading to an active discussion involving both audience and speakers. This discussion demonstrated a shared understanding of the importance of the rule of law for preserving peace and stability on Asia’s seas including the South and East China Seas.

6. This collaboration has been realized as part of the concrete efforts to explore Japan-UK joint cooperation projects in Southeast Asia , as agreed at the Second Japan-UK Foreign and Defence Ministers’ Meeting (“2+2”) in January 2016. Japan and the UK have shared common values including the rule of law, and have responsibilities towards international peace and security. Japan and the UK are each other’s closest security partners in Asia and Europe respectively. The two countries continue their close, global partnership in tackling international issues, including with Vietnam.