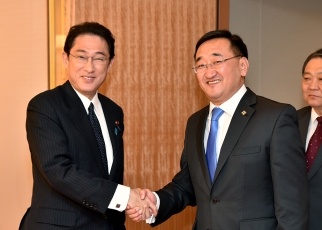 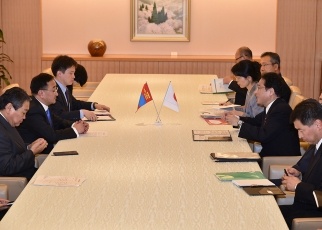 (1) Foreign Minister Kishida expressed his gratitude to Mongolia for its assistance at the time of the recent Kumamoto earthquake, welcomed the entry into force of the Japan-Mongolia Economic Partnership Agreement (EPA) on June 7, and explained that Japan aims to continue cooperating in order to strengthen the “strategic partnership” between the two countries.

(2) Foreign Minister Purevsuren offered congratulations for Japan’s success with last week’s G7 Ise-Shima Summit and commented that relations between the two countries are developing smoothly and that the Japan-Mongolia EPA is a major opportunity to bring the relationship to a new stage.

(1) Foreign Minister Kishida noted that the 11th ASEM Summit (ASEM11) taking place in Mongolia in July marks the 20th year anniversary of ASEM and that he hopes it serves as a meaningful opportunity to promote peace and prosperity in Asia and Europe.

(2) In response to the comment, Foreign Minister Purevsuren commented that Mongolia looks for continued cooperation from Japan for the success of the ASEM11.

The two Foreign Ministers exchanged views on the recent situation in North Korea, including North Korea’s nuclear and missile development, and agreed to continue cooperation based on the shared position that North Korea’s “nuclear possession” is totally unacceptable. It was confirmed that Mongolia would cooperate for an early resolution of the abductions issue.