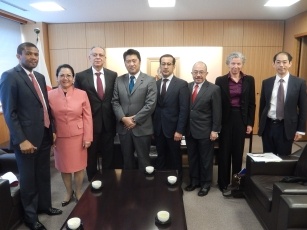 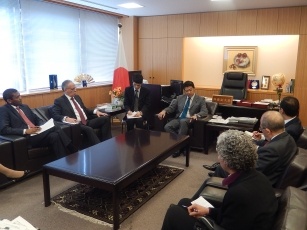 1. On February 22, commencing at 11:00 a.m. for approximately 30 minutes, Mr. Seiji Kihara, State Minister for Foreign Affairs, received a courtesy call from six governors and other officials (Egypt, Latvia, Republic of South Africa, Malaysia, Philippines and Switzerland) of the International Atomic Energy Agency (IAEA) currently visiting Japan. The overview of the meeting is as follows:

2. At the beginning, State Minister Kihara welcomed the visit of the governors and officials to Japan, and expressed his hope that they would deepen their understanding of Japan’s efforts for peaceful uses of nuclear energy, including the advanced use of radiation and the country’s efforts following the Fukushima Daiichi Nuclear Power Plant Accident. State Minister Kihara also stated that Japan is taking G7 presidency this year, and continues to steadily strengthen its efforts for both disarmament and non-proliferation based on the desire to pursue “a world free of nuclear weapons.” He added that the role of the IAEA has become even more important with regard to monitoring and verification on the process of final agreement on the Iranian nuclear issue and peaceful uses of nuclear energy, and Japan will closely cooperate with the IAEA members.

3. In response, the IAEA governors and other officials expressed their gratitude for the invitation to Japan. They stated that Japan is making important contributions to the Peaceful Uses Initiative (PUI) and other IAEA activities, and expressed their hope to strengthen the collaboration between Japan and their respective countries at the IAEA by taking advantage of this opportunity to deepen their understanding of Japan’s efforts for peaceful uses of nuclear energy and nuclear safety.