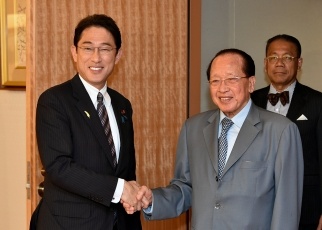 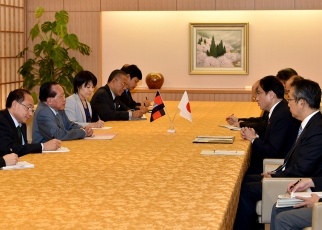 On July 2, commencing at 6:50 p.m. for approximately 30 minutes, H.E. Mr. Fumio Kishida, Minister for Foreign Affairs, held a meeting with H.E. Mr. Hor Namhong, Deputy Prime Minister and Minister of Foreign Affairs and International Cooperation of the Kingdom of Cambodia, who is visiting Japan to attend the Seventh Mekong-Japan Summit Meeting. The outline of the meeting is as follows.

1. General Remarks (Bilateral Relations)
Minister Kishida welcomed the active exchanges of dignitaries between Japan and Cambodia this year, which marks the 60th anniversary of the signing of the Treaty of Amity between the two countries, and also expressed his appreciation for Cambodia’s cooperation toward the successful holding of the Seventh Mekong-Japan Summit Meeting on July 4.

In response, Deputy Prime Minister and Minister of Foreign Affairs Hor Namhong expressed his gratitude to Japan, stating that Cambodia would not forget Japan’s cooperation since the peace process, and that he would like to continue to cooperate with Minister Kishida to further develop their two countries’ relations that have been upgraded to the “Strategic Partnership.”

2. Association of Southeast Asian Nations (ASEAN)
Minister Kishida reflected on Cambodia’s role over a period of three years as the ASEAN coordinating country for Japan, praised the progress made in Japan-ASEAN relations, and reaffirmed that Japan will continue to cooperate toward the building of the ASEAN community this year. In response, Deputy Prime Minister and Minister of Foreign Affairs Hor Namhong highly evaluated Japan’s cooperation with ASEAN, including for developing human resources and conducting youth exchanges, and commented that Cambodia had also worked to strengthen relations between ASEAN and Japan over the last three years as the coordinating country for Japan, and that it intends to continue to cooperate in the future in the regional frameworks.

3. Economic Relations
Minister Kishida welcomed the increase in investment in Cambodia by Japanese companies in recent years and the deepening of the two countries’ economic relations, and reaffirmed that Japan will support the development of infrastructure in Cambodia and strengthening the regional connectivity under “the Partnership for Quality Infrastructure” in order to promote further investment.

Deputy Prime Minister and Minister of Foreign Affairs Hor Namhong responded by expressing his gratitude for the opening of the Tsubasa Bridge in April that was constructed using grant aid from Japan and which was greatly celebrated by the Cambodian people, and also remarked that the development of the Mekong region would contribute to ASEAN integration.

4. Peace and Security in International Society
Deputy Prime Minister and Minister of Foreign Affairs Hor Namhong expressed Cambodia’s support for Japan’s “Proactive Contribution to Peace” that Prime Minister Abe had explained in the 13th Asian Security Summit (Shangri-La Dialogue) in Singapore, and also Japan’s candidate for the next executive director of the Regional Cooperation Agreement on Combating Piracy and Armed Robbery against ships in Asia (ReCAAP).