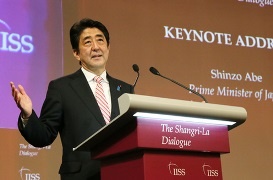 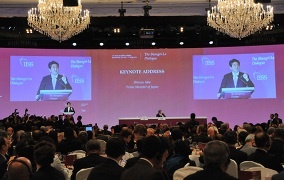 (1) On May 30, Prime Minister Shinzo Abe delivered a keynote address at the opening event for the 13th IISS Asian Security Summit /Shangri-La Dialogue/, which was held in the Republic of Singapore.

(2) Numerous persons including H.E. Mr. Lee Hsien Loong, Prime Minister of the Republic of Singapore, the defense ministers of various countries such as the Honorable Chuck Hagel, Secretary of Defense of the United States of America, members of international think tanks and the media participated in this opening event and listened to Prime Minister Abe’s address.

In the speech, Prime Minister Abe emphasized that “rule of law” is particularly important in order for the Asia-Pacific region, a global center for growth, to fully demonstrate its latent potential and to ensure its peace and stability. The major points of the address were as follows.

(1) Based on the perspective of thorough respect of the “rule of law” at sea, Prime Minister Abe advocated the three principles of (i) making and clarifying claims based on international law, (ii) not using force or coercion in trying to drive their claims, and (iii) seeking to settle disputes by peaceful means. He supported the effort made by the Republic of the Philippines and the Socialist Republic of Vietnam to resolve the issues in the situations in the South China Sea, and proposed that the relevant countries agree not to take unilateral action, and return to the spirit and provisions of the 2002 Declaration on the Conduct of Parties in the South China Sea (DOC). Further, Prime Minister Abe called for the People’s Republic of China to put the communication mechanism into action, which was agreed upon by Japan and China in order to prevent unexpected situations.

(2) Prime Minister Abe proposed to create a permanent committee in order to further enhance the East Asia Summit, as the premier forum taking up regional politics and security. He announced that Japan will combine various options within its assistance menu, including strategic use of ODA (provision of patrol vessels, dispatch of experts, etc.), support for capacity building by the Self-Defense Forces, and defense equipment and technology cooperation based on the “Three Principles on Transfer of Defense Equipment and Technology,” to seamlessly support the capacity of ASEAN countries in safeguarding the seas.

(3) Prime Minister Abe also explained Japan’s policy from the standpoint of “Proactive Contributor to Peace” and the current status of the consideration on the “reconstruction of the legal basis for security,” by introducing an example of “Kaketsuke-keigo,” (use of weapons for coming to the aid of geographically distant units or personnel under attack) in United Nations peacekeeping operations.

(4) Lastly, Prime Minister Abe, touching upon Japan’s initiatives in various fields including development assistance, peace building, support for women, people-to-people exchanges, etc., declared that Japan’s orientation as a peace loving country will never sway and Japan will continue to walk the “path of peace and prosperity” together with its partners in the region.

(1) In the question and answer session that took place following the keynote address, Prime Minister Abe responded to questions concerning (i) the strengthening of EAS functions, (ii) relations between Japan and the Republic of India, (iii) history recognition and (iv) issues related to the Senkaku Islands.

(2) In response to a question by an individual associated with China’s People’s Liberation Army on history recognition in relation to Prime Minister Abe’s visit to Yasukuni Shrine, Prime Minister Abe clearly stated that for the past 70 years following World War II, with feelings of deep remorse for the past, Japan has built a free and democratic society that protects human rights and respects the rule of law, and that Japan’s orientation as a peace-loving country will never sway, for which Prime Minister Abe earned applause from the audience.

(3) In response to a question concerning the Senkaku Islands by individuals associated with a foreign media outlet and a think tank, Prime Minister Abe stated that there is no doubt that the Senkaku Islands are an inherent part of the territory of Japan in light of historical facts and based upon international law, and they are under the valid control of Japan. He added that there exists no issue of territorial sovereignty to be resolved concerning the Senkaku Islands, and whether a submission to the International Court of Justice should be made or not is what China, who is challenging the status quo, should consider.