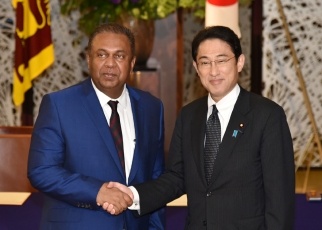 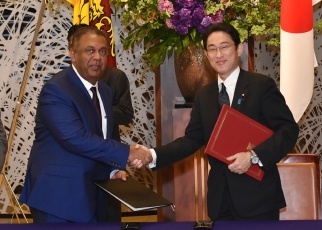 Prior to the meeting, the signing ceremony for the Project for National Transmission and National Distribution Network Development and Efficiency Improvement (Loan / 24.93 Billion Yen), as well as the grant project worth 0.5 billion yen, was held. This was the first Sri Lanka Foreign Ministers’ Meeting since the establishment of the Sirisena administration in January this year.

(1) Cooperation in Maritime Field
The two ministers, in the view that both Japan and Sri Lanka as maritime countries in Asia, decided to strengthen cooperation in maritime field, in the ways to hold Japan-Sri Lanka Dialogue on Maritime Security and Oceanic Issues within this year, to implement capacity building for the coast guards, and to promote the cooperation between defense authorities.

(2) Japan’s Security Policy
Minister Kishida stated that Japan’s orientation as a peace loving country since the end of war 70 years ago has been unchanged, and explained Japan’s security policy on the basis of proactive contribution to peace. In response, Minister Samaraweera expressed his expectation for the Japan’s proactive contribution to peace and peacekeeping.

(3) Economy and Economic Cooperation
Minister Kishida expressed his intention that Japan would like to strengthen economic relationship with Sri Lanka, the hub of economic community in Indian Ocean. Minister Kishida also stated that Japan would like to positively cooperate to build infrastructure in Sri Lanka, in the view of making Partnership for Quality Infrastructure to realize Sri Lanka’s sustainable development. In response, Minister Samaraweera expressed his hope for the expansion of investment from Japan and the early commencement of first Inter-Governmental Economic Policy Dialogue.

3. Peace Building
Minister Samaraweera explained Sri Lanka’s effort to realize national reconciliation, and expressed his expectation for further assistance from Japan. In response, Minister Kishida stated that Japan, as a friend of Sri Lanka, would continue assisting Sri Lanka’s effort towards peacebuilding and national reconciliation, including the assistance for reconstruction of North and East Provinces through training programmes for local officials.

4. Cooperation in Regional and International Arena
The two ministers exchanged the views on the situation of South China Sea, and decided to strengthen cooperation in the international arena including the disarmament and non-proliferation.