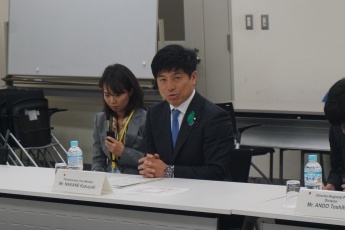 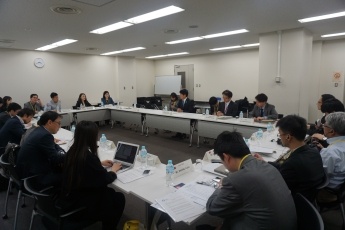 On April 16, commencing at 3:40 p.m. and lasting for approximately 20 minutes, Parliamentary Vice-Minister for Foreign Affairs Kazuyuki Nakane received a courtesy call from Japanese, Chinese, and ROK journalists participating in the 2nd Japan-China-ROK Trilateral Journalists Exchange Program. An overview of the courtesy call is as follows.

1. Parliamentary Vice-Minister Nakane welcomed the visit to Japan by the delegation. He mentioned the results of the Trilateral Foreign Ministers’ Meeting held last month for the first time in three years, and stated that Japan attaches importance to holding the Trilateral Summit at the earliest possible date. He also expressed his intention to make further efforts to that end, in cooperation with the People’s Republic of China and the Republic of Korea.

2. He expressed his hope that this program would firmly take root in the context of the trilateral cooperation, and that it will promote mutual understanding among journalists from the three countries. He expressed his expectation that this mutual understanding will also be passed on to the three countries’ people through this program. He hoped that the participants were able to learn much about the charms of Japan and have meaningful experiences via this program.

3. In response, the delegation asked questions regarding the trilateral cooperation and about the recent situation in East Asia, among other matters; and a lively exchange of views took place.

(The 2nd Japan-China-ROK Trilateral Journalist Exchange Program)
April 15 -18 in Tokyo, 18-21 in Beijing, 21 to 24 in Seoul (10 days in total).
Four journalists from each country participate in the program (12 journalists in total)