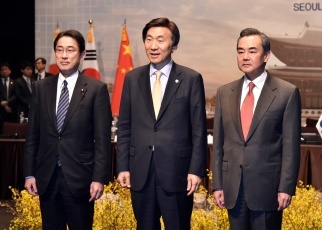 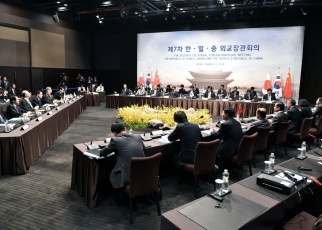 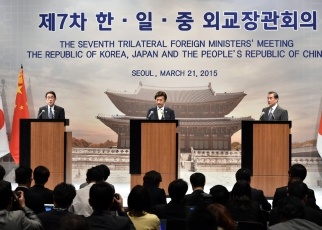 (1)The Situation in Northeast Asia
The three Ministers reaffirmed their staunch opposition to the development of nuclear weapons by North Korea, and decided to make joint efforts to resume meaningful talks for substantial progress in denuclearization of the Korean Peninsula. Minister Kishida called on the People's Republic of China and the Republic of Korea for enhanced cooperation on the abductions issue, which is one of the top priorities of the Abe administration.
(2)Cooperation in East Asia
Minister Kishida pointed out the importance of strengthening the East Asia Summit (EAS), which will mark its 10th anniversary this year, and of supporting the establishment of the ASEAN Community. The three Ministers appreciated the outcome of last year’s APEC summit in Beijing, as well as the People's Republic of China’s efforts to ensure it was a success, and they decided to cooperate to produce further concrete outcomes at this year’s APEC summit in the Philippines.
(3)Counter-Terrorism and the Middle East (ISIL)
Minister Kishida pointed out that the ISIL has become a serious threat to the international community, and emphasized that it is important for the nations of the international community to cooperate with each other by taking advantage of the individual strengths of each country and to make multi-faceted and long-term efforts to combat this threat. He explained that Japan will expand humanitarian assistance, as well as its support for improving counter-terrorism capabilities and building societies that do not produce this sort of extremism.
(4)Nuclear Disarmament
Considering that this year marks the 70th anniversary of the atomic bombings, Minister Kishida pointed out the importance of the success of the Nuclear Non-Proliferation Treaty (NPT) Review Conference of this year in showing how we can move closer to living in a world without nuclear weapons.

There were comments about the history issue made at the meeting, and Minister Kishida stated that Japan’s position remains the same as has been explained on various occasions including at bilateral meetings.