Third Meeting of the “Advisory Panel on Science and Technology Diplomacy” 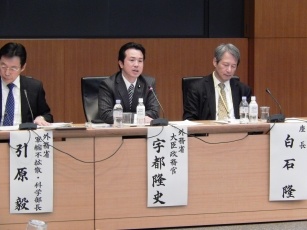 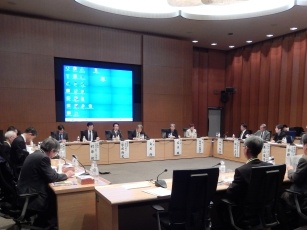 1. Today, on December 18, the third meeting of the “Advisory Panel on Science and Technology Diplomacy” was held with the attendance of Mr. Takashi Uto, Parliamentary Vice-Minister for Foreign Affairs.

2. The meeting of the Advisory Panel began with Vice-Minister Uto proposing discussion on two themes for advancing science and technology diplomacy, taking into account previous deliberations: Japan’s leadership in agenda-setting in the international community; and further utilization of science and technology in diplomacy towards emerging economies.

3. Dr. Yuko Harayama, Member of the Council for Science, Technology and Innovation, gave a presentation on the agenda-setting process of the international community. Dr. Masaru Iwanaga, President of the Japan International Research Center for Agricultural Sciences, gave a presentation on Japan’s diplomacy towards emerging economies with a focus on the Science and Technology Research Partnership for Sustainable Development (SATREPS) program. Mr. Masahiko Horie, former Japanese Ambassador to Malaysia, gave a presentation on Japan’s diplomacy towards emerging economies in the case of the assistance for Malaysia-Japan International Institute of Technology. Finally, all the panel members and participants actively exchanged views regarding the two themes proposed by Vice-Minister Uto, summarized into these points.

(1) It is important that Japan engages in the agenda-setting process at an earlier stage, looking ahead to upcoming diplomatic events.

(2) In agenda-setting, issues, which will address strong international concerns in the future and for which Japan can provide solutions, need to be identified.

(3) It needs to exercise science and technology diplomacy considering Japan’s national interest as well as benefit to Japan. It is important that Japanese standards and criteria are diffused and that personnel are trained for laying the groundwork to this end.

(4) Innovation is highly effective in advancing science and technology diplomacy towards emerging economies. It is essential that the Government makes use of private sector technological capabilities and funding.

4. The panel is scheduled to be held several times, approximately once every two months, and is expected to submit a recommendation to the Minister for Foreign Affairs on measures necessary for fulfilling and enhancing future science and technology diplomacy.

(Notes) The Advisory Panel on Science and Technology Diplomacy: Founding Objective and Attendees

(1) Founding Objective: The Advisory Panel was established under Mr. Fumio Kishida, Minister for Foreign Affairs, as a forum for experts to examine new challenges of science and technology diplomacy as well as MOFA’s and whole-of-government approaches to addressing such challenges, and to compile a set of recommendations for the promotion of science and technology diplomacy.

(2) Participants of the Third Meeting (PDF)