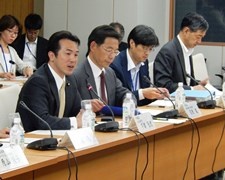 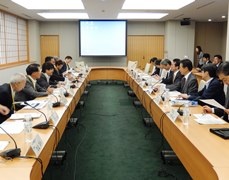 1. Today, on October 1, the second meeting of the “Advisory Panel on Science and Technology Diplomacy” was held with the attendance of Mr. Takashi Uto, Parliamentary Vice-Minister for Foreign Affairs.

2.The Advisory Panel began with Vice-Minister Uto describing his own long standing interest in science and technology and the promotion of industry. In addition, he spoke of how important he considered investigating measures to utilize Japan’s science and technology in its diplomacy and that he wanted to be an active participant in these discussions hereafter.

3. Then, after an explanation of the initiatives taken so far by the Ministry of Foreign Affairs, panel member Masafumi Kaneko gave a presentation on the possibilities for and issues facing Japan’s science and technology diplomacy, and then panel member Mitsuhiko Yamashita presented on the possibilities for alignment between international corporate activities and science and technology diplomacy. Finally, all the panel members and participants actively exchanged opinions based on these presentations.

4. The panel is scheduled to be held several times, approximately once every two months, and is expected to submit a recommendation to the Minister for Foreign Affairs on measures necessary for fulfilling and enhancing future science and technology diplomacy.

Participants of the Second Meeting (PDF)