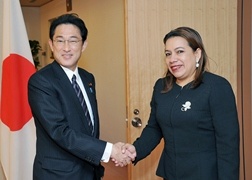 Minister of Foreign Affairs of the
Republic of Guyana 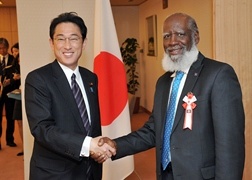 Minister of Foreign Affairs of Belize 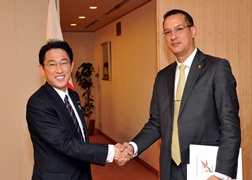 Today, on November 14, commencing at 6:00 p.m. for approximately one and a half hours, Mr. Fumio Kishida, Minister for Foreign Affairs, held three foreign ministers’ meetings with the following three states of the Caribbean Community (CARICOM) who are visiting Japan to attend the Fourth Japan-CARICOM Ministerial-Level Conference.

(1) The Hon. Carolyn Rodrigues-Birkett，Minister of Foreign Affairs of the Republic of Guyana;

(2) The Hon. Wilfred Elrington，Minister of Foreign Affairs of Belize; and

At the beginning of each meeting, Minister Kishida welcomed their visit to Japan during the Japan-CARICOM Friendship Year. In response, the foreign ministers from each country stated that they highly appreciated the results of the Japan-CARICOM Summit Meeting held last July as well as the fact that a follow-up of the summit meeting is to be carried out in the Fourth Ministerial-Level Conference, and expressed their expectation that the Ministerial-Level Conference to be held on November 15 be fruitful. Moreover, Minister Kishida and the foreign ministers of each country shared the view that on the occasion of the Ministerial-Level Conference, they would further strengthen Japan-CARICOM and bilateral relations. The other points of each meeting are as follows:

(1) Minister Kishida appreciated the fact that Minister Rodrigues-Birkett had been attending all the policy dialogues between Japan and CARICOM since the Second Japan-CARICOM Ministerial-Level Conference. Moreover, Minister Kishida added that a project for restoring a reservoir would soon be started, that the project for dealing with environmental/climate changes signed on the occasion of Prime Minister Shinzo Abe’s visit to the region was being implemented, and that a survey had been conducted in the field of renewable energy/energy saving that H.E. Donald Ramotar, President of the Republic of Guyana, had requested.

(2) Minister Rodrigues-Birkett stated that she was pleased to visit Japan again, that she considered that the Foreign Ministers’ Meeting provides a good opportunity to strengthen bilateral relations, and expressed her gratitude for Japan’s cooperation such as on the restoration of the reservoir and dispatching of volunteers.

(3) The two ministers confirmed that they would also cooperate in the international arena, including on the United Nations Security Council reform, and shared the view that as cochairs they would cooperate in the Fourth Japan-CARICOM Ministerial-Level Conference scheduled the following day to have fruitful discussions.

(1) Minister Kishida stated that he was pleased by the active exchanges held between the two countries in the Japan-CARICOM Friendship Year and that he would like to cooperate with Belize, geographically located in Central America, in the context of the Japan-Central America relations as well. Moreover, Minister Kishida stated that the Government of Japan had decided to provide grant aid utilizing products produced in areas affected by the Great East Japan Earthquake and to provide equipment for the expansion of the Sea Island cotton industry.

(2) Minister Elrington stated that he placed emphasis on the Central American Integration Process as well as CARICOM, and that coordination with Japan, a developed country, was crucial for such purposes. Moreover, expressing his gratitude for the support from Japan such as the grant aid and dispatching of volunteers, Minister Elrington stated that he expected continuous support from Japan on climate change mitigation/adaptation and disaster risk reduction.

(3) In addition, Minister Elrington also stated that he highly appreciated Prime Minister Abe’s statement at the Japan-CARICOM Summit Meeting last July, in which he stated that Japan’s contribution for making a safe and better world and support for CARICOM states to overcome their vulnerabilities are important.

(4) The two ministers confirmed that they would cooperate not only bilaterally but in the international arena, including the United Nations Security Council reform, to make contributions together.

(1) Minister Kishida stated that he was pleased to reunite with Minister Steele following the Third Japan-CARICOM Ministerial-Level Conference, and conveyed the decision of the Government of Japan to provide grant aid utilizing products of Japanese small and medium-sized enterprises. Minister Kishida also stated that he expected Grenada to utilize the grant aid and the Project for Improvement of Fishery Equipment and Machinery in Grenada (JPY 484 million), for the progress of the economy and society of Grenada.

(3) The two ministers confirmed that they would cooperate not only bilaterally but in the international arena, including the United Nations Security Council reform, to make contributions together.