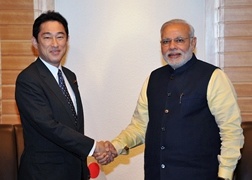 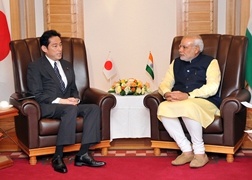 On September 1, commencing at 10:15 a.m. for approximately 30 minutes, Minister for Foreign Affairs, Mr. Fumio Kishida made a courtesy call on H.E. Mr. Narendra Modi, Prime Minister of India, who is visiting Japan. The overview of the meeting is as follows.

3. Furthermore, Minister Kishida said he would like to visit India and hold the next Japan-India Foreign Ministers' Strategic Dialogue. He also said that he discussed various items for cooperation with Ms. Sushma Swaraj, External Affairs Minister of India, in August this year, and expressed his expectation that the Summit Meeting to be held later on the same day would be fruitful.

4. In response, Prime Minister Modi said that he had decided to visit Japan as the first destination as Prime Minister, other than India’s neighboring countries. He said Hiroshima’s grief has been shared by the whole humankind, and expressed his condolences once again. Furthermore, Prime Minister Modi said Japan and India share a spiritual bond, and he conveyed his feelings of sympathy for the victims of the torrential rain disaster that struck Hiroshima in August.

5. Prime Minister Modi also said that, both at a personal level and as Chief Minister of Gujarat State, he has been building up a very amicable relationship with Japan over many years, and he highly appreciated that the relationship between the two countries has also become closer in recent years. He stated that he would like to make a joint effort to further enhance the cooperative relationship between Japan and India for the future of Asia in the 21st Century, based on the stable governments in both countries.

(* The foregoing is a provisional translation. The above date denotes the date of the issue of the original press release in Japanese.)
Page Top
Back to Press Releases