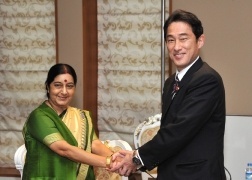 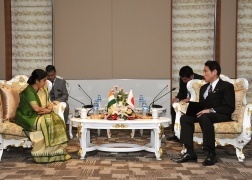 On August 10, commencing at 5:25 p.m. for approximately 40 minutes, Mr. Fumio Kishida, Minister for Foreign Affairs of Japan, who visited Naypyidaw, Myanmar, to attend ASEAN-related meetings, held a meeting with Ms. Sushma Swaraj, External Affairs Minister of India. The outline of the meeting is as follows.
1. At the beginning, Minister Kishida stated that Japan and India are two major democracies in Asia that share universal values and strategic interests and that he would like to reaffirm the importance of the "Strategic and Global Partnership" between Japan and India at this first Foreign Ministers' Meeting since the establishment of the new Modi administration. Additionally, Minister Kishida said that he is from Hiroshima and expressed his gratitude for the memorial message to the victims of the Hiroshima atomic bombing that Prime Minister Modi delivered on August 6 and the silent prayer that the Indian Parliament offers in August every year in memory of the victims of the Hiroshima and Nagasaki atomic bombings. In response, Minister Swaraj said that this is the first time she met Minister Kishida, but she received a congratulatory telephone call from him when she was appointed as External Affairs Minister, and although a solid relationship has been built between Japan and India thus far, she is committed to building an even stronger relationship under the new Modi administration.
2. Minister Kishida commented on Japan-India cooperation in the political and security fields, and while welcoming the holding of the "Malabar" joint maritime exercise between Japan, the U.S. and India last month, he said he wants to continue to hold the Japan-India Foreign Ministers' Strategic Dialogue and further strengthen vice-ministerial-level "2+2" dialogues and Japan-U.S.-India dialogues. Minister Swaraj said she fully agrees that continuing and strengthening those dialogues is important and in particular wants to realize a Foreign Ministers' Strategic Dialogue at an opportunity that is mutually convenient.
3. With regard to Japan-India cooperation in the fields of the economy and economic cooperation, Minister Kishida said that he would like to promote Japanese investment in India to support infrastructure development, including highways, and to strengthen cooperation toward enhancing regional connectivity between India and its neighbors. Minister Swaraj replied that Japan's initiatives are welcome, while explaining that various initiatives in the economic field are being presented by the new administration, including a plan for 100 smart cities, and she hopes to strengthen cooperation with Japan in these new fields as well.
4. In addition, in connection with cooperation in the international arena, Minister Kishida stated that in the lead-up to the 70th anniversary of the founding of the United Nations in 2015 he would like to cooperate closely with the G4 and between Japan and India in order to lift momentum for the U.N. Security Council reform. In response, Minister Swaraj said she would like to work together toward achieving the reform in 2015 by strengthening cooperation between Japan and India as well as by boosting cooperation with countries in Africa etc.