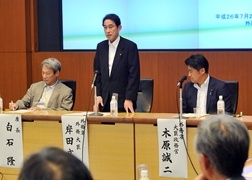 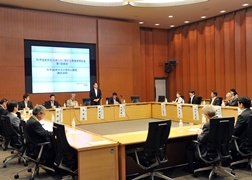 1. Today, on July 29, the first meeting of the “Advisory Panel on Science and Technology Diplomacy” was held with the attendance of Mr. Fumio Kishida, Minister for Foreign Affairs, and Mr. Seiji Kihara, Parliamentary Vice-Minister for Foreign Affairs. Dr. Takashi Shiraishi, President of the National Graduate Institute for Policy Studies, who serves as the chairman of the panel; experts from fields such as science and technology, industry and international relations; and representatives from relevant ministries and organizations participated in the meeting.

3. The panel is scheduled to be held several times, approximately once every two months, and is expected to submit a recommendation to the Minister for Foreign Affairs on measures necessary for fulfilling and enhancing future science and technology diplomacy.

Participants of the First Meeting (PDF)