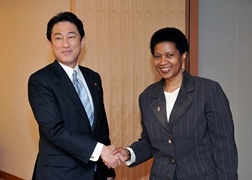 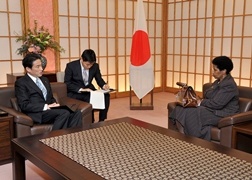 On March 26, from 2:55 p.m. for approximately 15 minutes, Minister for Foreign Affairs Mr. Fumio Kishida received a courtesy call from Her Excellency, Ms. Phumzile Mlambo-Ngcuka, Executive Director of UN Women (the United Nations Entity for Gender Equality and the Empowerment of Women), who was visiting Japan at the invitation of the Ministry of Foreign Affairs. The overview of the meeting is as follows.

1. Minister Kishida welcomed Executive Director Mlambo-Ngcuka to Japan and praised her leadership. Minister Kishida said that the Government of Japan is working proactively inside and outside Japan to create “a society in which women shine,” and that Japan intends to cooperate closely with UN Women in particular. Executive Director Mlambo-Ngcuka responded by saying that she is pleased with the effects that Prime Minister Abe’s address at the United Nations General Assembly last year had on UN Women, in which he referred to women's advancement in society and UN Women. She also expressed gratitude for Japan’s support thus far to UN Women, its increased contribution in particular, and said Japan may become a global model for women’s economic participation.

2. Minister Kishida said Japan contributed approximately 5.5 million U.S. dollars this month to UN Women’s projects in countries in the Middle East and Africa, and is scheduled to contribute over 10 million U.S. dollars to UN Women this year. He said this is an indication of the emphasis that Japan places on UN Women. Executive Director Mlambo-Ngcuka said she hopes Japan will contribute on women’s empowerment issue in the Post-2015 Development Agenda, and UN Women wants to cooperate with Japan.

3. At the end of the meeting, Minister Kishida and Executive Director Mlambo-Ngcuka confirmed they will continue to work closely and strengthen their cooperation.

(* This is a provisional translation. The above date denotes the date of the issue of the original press release in Japanese.)
Page Top
Back to Press Releases