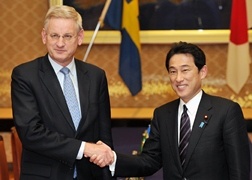 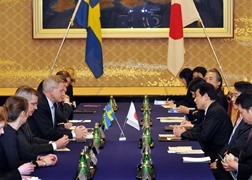 Minister Kishida welcomed Minister Bildt’s visit to Japan, and expressed once again his gratitude for the excellent proceedings by Minister Bildt at the Japan-NB8 (Nordic-Baltic 8) Foreign Ministers’ Meeting in Delhi in November last year. He also stated Japan is promoting cooperation with the Nordic and Baltic States, and that Sweden, which possesses high level of technology and industrial competitiveness and has significant influence in the international community, is an important partner for Japan. Minister Bildt replied that he is delighted to be able to visit Japan for the first time in seven years, and stated that bilateral relations between Japan and Sweden are extremely good.

Minister Kishida told he visited Ukraine last year and has released a statement regarding the recent situation in Ukraine that mentioned the importance of the rule of law and territorial integrity as well as democratization and the creation of a market-based economy. He also stated where the current circumstances are concerned, he is paying close attention to the situation surrounding the Crimean Peninsula.
In response, Minister Bildt told that the European Union (EU) is making various efforts, and the problem of a serious fiscal crisis is at the root of the Ukraine issue, and overcoming that will be the key to achieving political stability in the country.

3. Contributing to peace and stability

Minister Bildt stated that Japan and the EU are partners, and the Japan-EU Economic Partnership Agreement (EPA) will be beneficial to both Japan and the EU. Minister Kishida replied that he put an emphasis on a cooperative relationship with the EU, and expressed his strong commitment to the early conclusion of the Japan-EU EPA and Strategic Partnership Agreement (SPA).

5. Bilateral relations with focus on the economic sector

Minister Kishida told that preparing an environment conducive to women’s participation in the workforce and restoring vitality to society are key pillars of the growth strategy in Abenomics, and that he wants to learn from the expertise of Sweden, which is ahead in those fields. Minister Kishida also mentioned a memorandum signed in May last year on cooperation in the railway sector, and said he hopes Japan’s experience of operating Shinkansen “bullet” trains, including in snow-prone regions, will provide a helpful reference to Sweden.
Minister Bildt replied the role that women fulfill in Sweden has progressed greatly over the last 30 years, and that he wants to share Sweden’s expertise with Japan.

6. Cooperation with the Nordic and Baltic States

Minister Kishida stated there is a strong possibility that Japan will cooperate with the NB8 while utilizing Sweden’s expertise in fields such as the Arctic, peace-building and the participation of women in society, and that he wants to utilize various opportunities to deepen discussion with the NB8 and advance cooperation further.
Minister Bildt replied that the Japan-NB8 Foreign Ministers’ Meeting in Delhi last year was a good meeting, and continued he is happy that follow-up activities have also been steadily implemented since that meeting.

7. Other issues
In addition, the two ministers also exchanged views on the situation in East Asia.