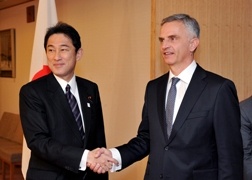 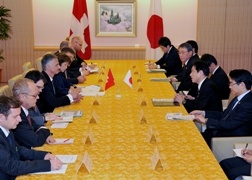 On February 4, for approximately 35 minutes from 3:50 p.m., Fumio Kishida, Minister for Foreign Affairs of Japan, held talks with H.E. Mr. Didier Burkhalter, President and Head of the Federal Department of Foreign Affairs, Swiss Confederation, who was on a working visit to Japan. An outline of the meeting follows:

With Japan and Switzerland this year marking the 150th anniversary of the conclusion of their Treaty of Amity and Trade, the two foreign ministers shared the views that the two countries have maintained good relations consistently over the past 150 years. They agreed to advance these cooperative ties further.

They also shared a recognition that economic relations between Japan and Switzerland has been developing steadily, as exemplified by the promotion of bilateral trade and investment following the conclusion of the Economic Partnership Agreement (EPA) between the two countries.

Minister Kishida highly evaluated a number of initiatives by Switzerland to address global challenges using its unique position in international society. He said Japan hopes to work with Switzerland to contribute to the interests of the whole world, noting that the two countries have many issues of common concern. President Burkhalter expressed the same hope.

Minister Kishida expressed Japan's hopes of working closely with Switzerland to bring about specific progress on Security Council reform toward the 70th anniversary of the establishment of the United Nations in 2015.

Minister Kishida said that Japan, as the only country in the world to have suffered nuclear attacks in war, places great value on efforts to achieve a world free of nuclear weapons through such mechanisms as the Non-Proliferation and Disarmament Initiative (NPDI). Japan hopes to cooperate with Switzerland in this area, he said. In response, President Burkhalter said that Switzerland appreciates Japan's commitment to arms reduction.

Minister Kishida said Japan has decided to support the Montreux Document on the Operations of Private Military and Security Companies During Armed Conflict, which was drawn up at the initiative of Switzerland. Japan hopes to work with Switzerland in the field of international humanitarianism, he said. President Burkhalter expressed gratitude for Japan's support for the Montreux Document.

Minister Kishida praised Switzerland's contribution to disaster preparation and prevention, and asked for cooperation from the country to make a success of the U.N.-sponsored third World Conference on Disaster Reduction, scheduled to be held in Sendai in March 2015. President Burkhalter said that disaster preparation and prevention is a key topic for the Organization for Security and Co-operation in Europe (OSCE), which Switzerland chairs this year, adding that Switzerland is ready to provide strong support for the coming conference.

President Burkhalter explained Switzerland's efforts and policies as this year's chair of the OSCE. He said that the OSCE can serve as a good reference for East Asia in terms of security frameworks. Minister Kishida expressed gratitude to President Burkhalter for his interest in security in East Asia, and briefed him on the current framework of dialogues in the region.