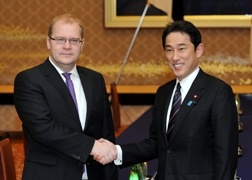 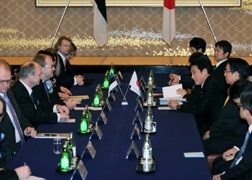 Foreign Minister Kishida welcomed Minister Paet’s first visit to Japan in six years and stated that he expected further development of Estonia, which had achieved democratization and a market economy in about twenty years since its independence, entered the North Atlantic Treaty Organization (NATO) and the European Union (EU), joined the Organisation for Economic Co-operation and Development (OECD), introduced the Euro, and became one of the developed countries. In response, Minister Paet welcomed the fact that the relationship between Estonia and Japan has been expanding in the fields of politics, economy, culture, and human exchanges, including the cooperation between Japan and the Nordic and Baltic States, and stated that he would like to further strengthen relationships between the two countries on this occasion.

Minister Kishida explained policies aimed at making Japan the world’s most advanced IT nation. He also stated that in order to achieve Japan’s growth strategy, he wants to work together with Estonia, which leads the world in the IT sector. Minister Kishida also stated that threats in cyberspace pose problems on the security front. He expressed the view that bilateral and multilateral cooperation, such as human resources development and international information-sharing, is important in building frameworks for dealing effectively with terrorism, crime and other problems in cyberspace, and that he intends to deepen cooperation with Estonia. In response, Minister Paet expressed expectation that Japan would make a greater contribution, including the participation in the NATO Cooperative Cyber Defence Centre of Excellence, which is located in Estonia.

4. Economic cooperation, including in the energy sector

Minister Kishida noted that emissions trading with Japan has contributed to the diffusion of electric vehicles and improvement of energy efficiency in public buildings in Estonia, and he explained that Japan wishes to contribute to the diversification of Estonia’s energy supplies via cooperation on a plan to construct a nuclear power plant in Lithuania. Minister Paet replied that Japan is an important strategic partner for Estonia, and expressed his strong support for the Japan-EU Economic Partnership Agreement (EPA) and his intention to strengthen economic ties with Japan.

5. Cooperation with Nordic and Baltic states

In addition, the two ministers also exchanged views on relations with Russia, the issues of the Arctic among others.