Meeting between Minister for Foreign Affairs Fumio Kishida and His Excellency Mr. Nabil Fahmi, Foreign Minister of the Arab Republic of Egypt 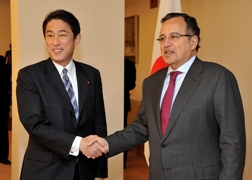 On December 19, commencing at 5:10 p.m. for approximately 30 minutes, Minister for Foreign Affairs Mr. Fumio Kishida held a meeting with His Excellency Mr. Nabil Fahmi, Foreign Minister of the Arab Republic of Egypt. The overview of the meeting is as follows.

1. The situation in Egypt

(1) Minister Kishida said the steady progress with the roadmap is encouraging. The finalization of the amended draft constitution is an important milestone in particular, and he will be watching closely the course of the national referendum on January 14 and 15 next year. He also said regulations such as the protest law and the detention of anti-government activists are a concern as they are issues that also involve human rights and social stability. On the other hand, he is well aware of the struggles the interim government faces in maintaining security and public order. He condemns the terrorist activities in the Sinai Peninsula, and extends his condolences to the victims and their families.

(2) In response, Minister Fahmi said democratization process such as drafting the amended constitution has been progressing, it proceeds based on guarantee of the basic human rights and the principle of the rule of law and he hope the interim-period will be terminated peacefully by next summer.

(1) Minister Kishida said Japan will continue to extend support toward economic development and socio-economic stability that benefits Egyptian citizens overall, while focusing on Egypt’s progress with the democratization process and the promotion of youth employment, and he announced the provision of the grant aid will commence for the construction of a ward for the Cairo University Pediatric Hospital, and with the cooperation of the UNDP and other organizations a total of approximately 16 million USD in support is being newly prepared. With the Construction of New Dirout Group of Regulators (DGR) and Improvement of Water Management Project as a starting point, the Japan wants to implement new yen loans also. However, in going forward Japan wants to consider such loans based on explanations of Egypt’s specific efforts toward economic stabilization. He noted that the travel warnings in some tourist locations were lowered further last week, and said he hopes that this, coupled with stability in Egypt’s social situation, helps to encourage tourism and other people-to-people exchanges.

(2) In response, Minister Fahmi said expansionary policies are being implemented for improving the economic situation and he expressed gratitude for the new economic assistances and the longstanding assistances from Japan such as Egypt-Japan University of Science and Technology (E-JUST).