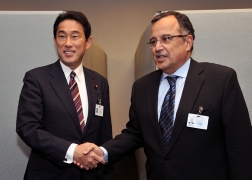 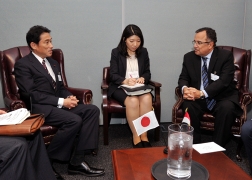 On September 24, commencing at around 11 a.m. (local time) for approximately 30 minutes, Minister for Foreign Affairs Fumio Kishida, who was visiting New York to attend the United Nations General Assembly, held a foreign ministers’ meeting with Mr. Nabil Fahmi, Foreign Minister of the Arab Republic of Egypt. The overview of the meeting is as follows.

1. The situation in Egypt
Foreign Minister Kishida stated that Egypt is following a difficult process toward a democratic government, and said he hopes the interim government stabilizes public order promptly, implements its roadmap appropriately, and advances a democratization process steadily.
Additionally, he said he recognizes that steady progress with the task of amending the constitution in accordance with the roadmap is one positive step, and that it is important for the interim government to advance a comprehensive democratization process to bring about national reconciliation.
Furthermore, Foreign Minister Kishida said he understands the importance of securing public order, but that he also hopes appropriate responses will be made to problems concerning human rights, including desisting from acts of violence, and behaving with the greatest extent of self-restraint. He said he is concerned about the recent decision ordering the cessation of activities by the Muslim Brotherhood, from the standpoint of future national reconciliation and social stabilization going forward.

In response, Foreign Minister Fahmi said the interim government is scheduled to formulate a new constitution and hold parliamentary and presidential elections in line with the roadmap, and its commitment to the roadmap has not changed. However, he sought understanding regarding the situation Egypt currently faces, which includes violence, terrorism and the polarization of political forces.

2. Bilateral relations
Foreign Minister Kishida said Japan is maintaining and fortifying its traditional friendly bilateral relationship with Egypt. He also stated that the Government of Japan, as an old friend of Egypt, will undertake necessary support for Egypt to overcome its difficulties, shift peacefully and smoothly to a democratic structure, and achieve economic and social stability, while assessing progress in the democratization process and continuing to cooperate with the international community. Additionally, he said he hopes high-level representatives, including Foreign Minister Fahmi, will take the opportunity to attend the “Third Japan-Arab Economic Forum,” scheduled for December this year.

Foreign Minister Fahmi replied that he once served as an ambassador to Japan and understands well the importance of Egypt’s relationship with Japan. He expressed gratitude for the many years of support the Government of Japan has extended to Egypt, including the Suez Canal Bridge, the Egypt-Japan University of Science and Technology (E-JUST) and the Grand Egyptian Museum Construction Project. He said he is looking forward to the day he is able to meet Foreign Minister Kishida in Cairo.