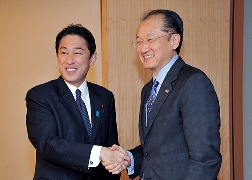 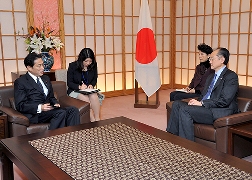 On December 6, commencing at 2 p.m. for around 15 minutes, Minister for Foreign Affairs Fumio Kishida received a courtesy call from H.E. Dr. Jim Yong Kim, President of the World Bank, who was visiting Japan. The overview of the meeting is as follows.

1. At the start of the meeting, Minister Kishida welcomed President Kim’s second visit to Japan of this year. Minister Kishida stated that the World Bank was an important partner for Japan’s diplomatic strategy, and that Japan hoped to work with the World Bank in promoting human security, achieving the Millennium Development Goals (MDGs), formulating the post-2015 development agenda, and tackling global challenges, including health and disaster risk reduction.

2. President Kim expressed appreciation for the cooperation Japan has extended to the World Bank, and stated that the World Bank looked forward to collaborating with Japan in promoting global health, in particular, universal health coverage.

3. Minister Kishida praised the World Bank for taking proactive steps towards mainstreamining disaster risk reduction. In response, President Kim noted on the importance of drawing linkages between disaster risk reduction and climate change measures. Minister Kishida explained that Japan promotes the “Proactive Diplomatic Strategy for Countering Global Warming—Actions for Cool Earth,” and would continue to partner with the World Bank, including in the area of climate change.