Meeting and Dinner between State Minister for Foreign Affairs Suzuki Takako and Minister of Foreign Affairs, Migration and Tunisians Abroad of the Republic of Tunisia H. E. Mr. Othman Jerandi 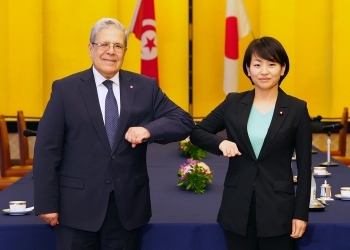 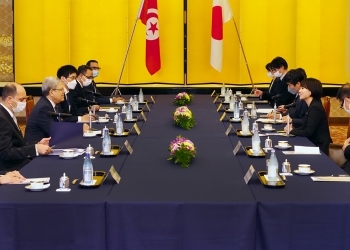 On June 2, commencing at 6:25 PM for approximately 2 hours, Ms. Suzuki Takako, State Minister for Foreign Affairs of Japan, held a meeting and dinner with H. E. Mr. Othman Jerandi, Minister of Foreign Affairs, Migration and Tunisians Abroad of the Republic of Tunisia, who is visiting Japan. The overview is as follows:

At the outset, State Minister Suzuki expressed her welcome for Minister Jerandi’s visit to Japan and stated that Tunisia is an important partner in the Middle East and African region and that Japan hopes to further strengthen cooperation with Tunisia towards TICAD 8 in August, which Tunisia will host. In response, Minister Jerandi welcomed the expansion of cooperative relations with Japan in a wide range of fields, and expressed his hope to work closely with Japan towards the successful TICAD 8.

Both sides also exchanged views on regional situations, including in Libya and North Korea, and concurred to strengthen cooperation. In this regard, the Ministers affirmed that they would continue to coordinate at the international fora including the United Nations in dealing with North Korea, including on the nuclear, missile and abductions issues.