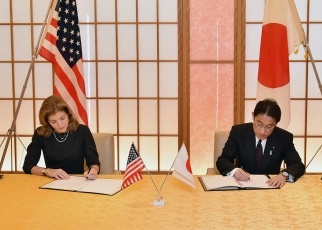 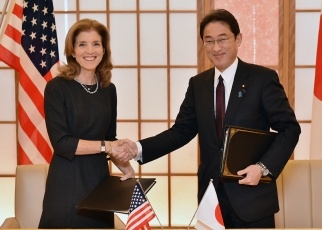 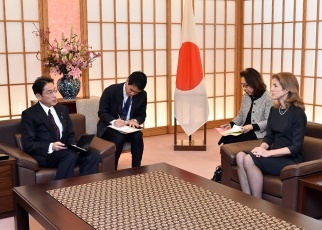 (1) Since 1987, Japan has borne part of the costs, which the United States is obliged to bear under the provision of Article XXIV of the Status of Forces Agreement (SOFA), by concluding SMAs as special measures relating to the SOFA, noting situations involving both countries, and with a view to ensuring the effective operations of U.S. Forces in Japan (USFJ).

(2) In light of the fact that the current SMA remains in force until March 31, 2016, the Government of Japan (GOJ) and the Government of the United States of America (USG) have had discussions. As a result, H.E. Mr. Fumio Kishida, Minister for Foreign Affairs, and H.E. Ms. Caroline B. Kennedy, Ambassador Extraordinary and Plenipotentiary of the United States of America to Japan, signed the new SMA on January 22 in Tokyo.

2 Outline of the New SMA

(2) Expenditures to be borne by Japan:
Japan will bear the labor costs, the utilities costs and the training relocation costs under the new SMA.

Policies for the implementation of the new SMA: Notes between Minister Kishida and Ambassador Kennedy concerning the new SMA

Labor Costs:
The upper limit of the number of workers funded by GOJ will be increased from current 22,625 to 23,178 in a phased manner. (note1)

Training Relocation Costs:
The current framework will be maintained.

(note2) The percentage of the annual utilities costs funded by GOJ under the current SMA is 72%.

3 Significance of Concluding the new SMA
Since the security environment surrounding Japan has become increasingly severe, Host Nation Support by Japan under the new SMA plays a vital role in sustaining a stable presence of USFJ as well as maintaining and strengthening the Japan-US alliance.