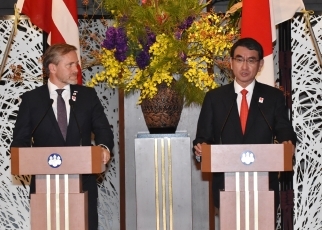 The two ministers welcomed the frequent high-level visits between Japan and Denmark this year, which marks the 150th anniversary of the establishment of diplomatic relations between the two countries.

(1) Minister Kono stated that he welcomed the developments of the bilateral cooperation in such area as trade and investment, maritime affairs and ports and harbors, and health and medical care, based on the “Strategic Partnership” announced in the joint statement issued by Prime Minister Abe and then Prime Minister Thorning-Schmidt in 2014.

(2) The two ministers appreciated the signing of the tax convention and the memorandums of cooperation on maritime affairs, and health and medical care (note), as the follow-up of the “Strategic Partnership”. The two ministers also reconfirmed concrete results had been already appeared in a variety of fields.

(3) Furthermore, the two ministers instructed their relevant officials to vigorously consider and have bilateral consultations on how to elevate the “Strategic Partnership” to the next level based on such concrete results achieved so far.

The two ministers agreed that the Arctic policy was an important area of collaboration for both countries and confirmed that they would continue to advance their cooperation in this field.

Minister Kono stated that it would be crucial for the international community as a whole to strengthen the pressure on North Korea, including the full implementation of the relevant United Nations Security Council resolutions, in order to change North Korea’s policies.