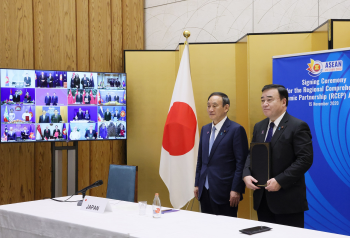 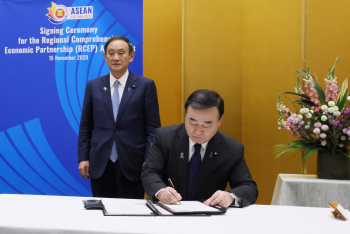 On November 15, Mr. SUGA Yoshihide, Prime Minister of Japan attended the 4th RCEP Summit held as a video conference, followed by the RCEP Agreement Signing Ceremony. The overview of both events is as follows.

(1) At the outset, Viet Nam Prime Minister Nguyen Xuan Phuc, Chair of the Summit made welcoming remarks for the Leaders and Ministers of the participating countries in the RCEP Summit.

(2) Prime Minister Suga made remarks as summarized below.

(i) I am grateful for Prime Minister Phuc taking the initiative as the Chair.
(ii) Today, we are pleased to witness the signing of the RCEP Agreement, which has come to fruition from the negotiations that each country has persistently carried out for approximately eight years under the leadership of ASEAN.
(iii) Until now, Japan has consistently taken the initiative in expanding a free and fair economic zone, while maintaining and strengthening multilateral free-trade system.
(iv) The RCEP Agreement does not only improve market access, but also establishes rules in areas including intellectual property and e-commerce, which in turn promotes regional trade and investment, as well as supply chain efficiency.
(v) Amidst the global economic downturn and inward-looking sentiment caused by the novel Coronavirus Disease 2019 (COVID-19), it is even more essential to promote free trade.
(vi) It is unfortunate that India is not signing the RCEP Agreement today, but India remains an essential player in the regional economic framework. Japan is determined to continue playing a leading role in India’s return in the future to this Agreement.

(3) Summary of the remarks by other participants is as follow.

(i) Today is a historic day that marks the signing of this Agreement after eight years of negotiations. We have cooperated by overcoming different levels of economic development .
(ii) The signing of the RCEP Agreement shows our commitment to the multilateral trade system and is expected to be a catalyst for future economic recovery amid rising protectionism due to the impact of the COVID-19.
(iii) We expect the RCEP Agreement to enter into force as soon as possible. It is vital that the RCEP Agreement will be properly implemented and utilized.
(iv) It is unfortunate that India cannot attend today’s Signing Ceremony, but the door remains always open to India.

(4) After the meeting, the Joint Leaders’ Statement was issued, and “Ministers’ Declaration on India’s Participation in the Regional Comprehensive Economic Partnership (RCEP)” was published, which was adopted at the RCEP Ministerial Meeting on November 11.

From Japan, with the presence of Prime Minister Suga, the Minister of Economy, Trade and Industry KAJIYAMA Hiroshi signed the Agreement alongside representatives of 14 other countries (Minister for Foreign Affairs MOTEGI Toshimitsu signed the Agreement beforehand, meaning it was co-signed by the both Ministers for Japan).