Japan and the Management of Whales

Whaling in Japan targets cetacean species as listed below, whose abundance has been confirmed by the International Whaling Committee (IWC). Catch quotas are set within the catch limits calculated in line with the method adopted by the IWC to avoid negative impact on cetacean resources.

Whaling in Japan is conducted within Japan’s territorial sea and its exclusive economic zone (EEZ). 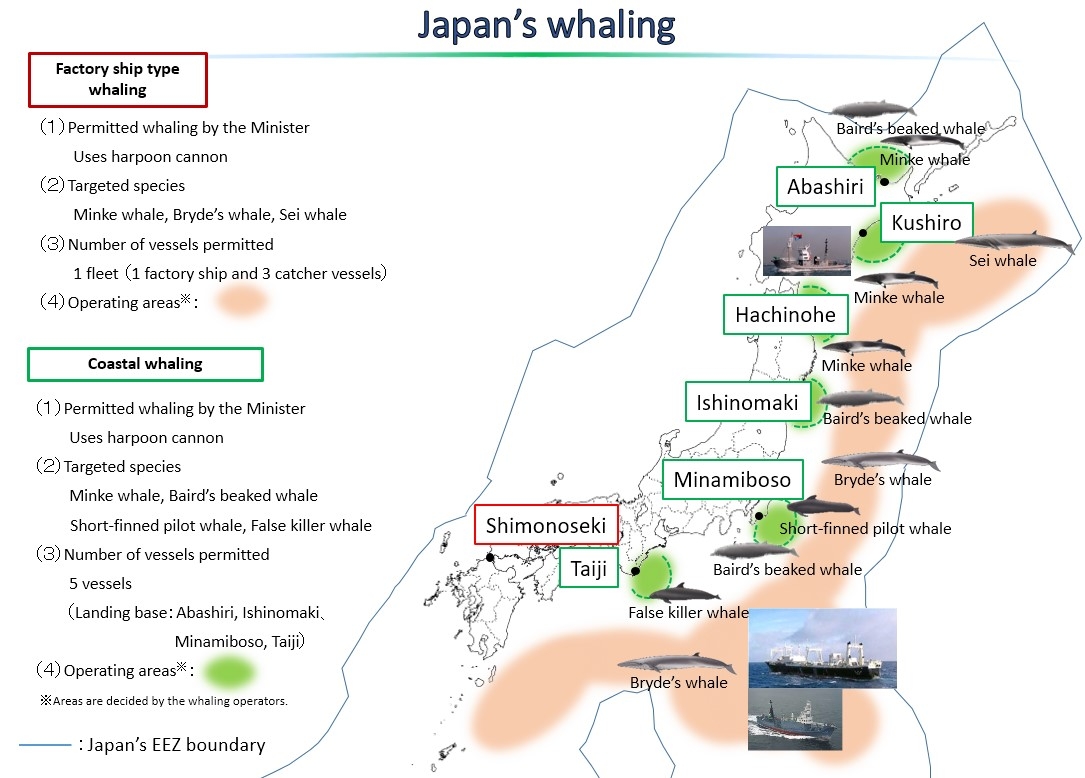 ⑴ Why Japan Withdrew from the IWC

Japan has consistently insisted that marine living resources including Cetaceans should be utilized in a sustainable manner under science-based management. In 1951, Japan acceded to the International Convention on the Regulation of Whaling (ICRW), concluded to ‘provide for the proper conservation of whale stocks and thus make possible the orderly development of the whaling industry. Ever since the so-called moratorium on commercial whaling(Note) was introduced, Japan has been sincerely engaged in the dialogues in the IWC for over 30 years to enable the resumption of commercial whaling, showing that a sustainable whaling is possible on the basis of scientific data, while actively taking part in the efforts seeking for solutions.

Although scientific evidence has confirmed that certain whale species are abundant, Member States that focus exclusively on the protection of whales, while ignoring the necessity of sustainable use of whales, refused to agree to take any tangible steps towards reaching a common position that would ensure the orderly development of the whaling industry, clearly mentioned in the ICRW. Furthermore, the 67th Meeting of the IWC in September 2018 unveiled the fact that it was not possible in the IWC even to seek the coexistence of States with different views and positions. It can be seen for instance from the rejection of Japan’s proposal and orderly development of the whaling industry which clearly mentioned in the Convention was ignored. Consequently, Japan withdrew from ICRW on June 30th, 2019, and resumed the commercial whaling in July, 2019.

⑵ Japan’s Position after Withdrawing from the IWC

Even after its withdrawal from the IWC, Japan remains committed to international cooperation for the proper management of marine living resources. In coordination with international organizations, such as through its engagement with the IWC as an observer, Japan will continue to contribute to the science-based sustainable management of whale resources.

Japan has made efforts to deepen understanding among the international community about Japan’s whaling policy. In making use of every opportunity to disseminate accurate information about whaling, such as contributing articles to the major newspapers, appealing to the public through Japan’s diplomatic missions overseas, and presenting lectures by senior MOFA officers at both domestic and international levels, we highlight the following key points.

Page Top
Back to Agriculture, Fisheries and Forest