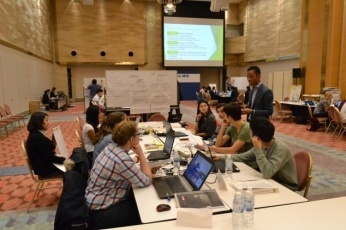 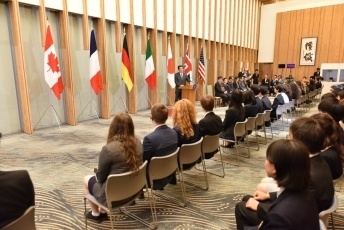 Courtesy visit to the Prime Minister

The first Junior Summit was organized in relation to 2005 G8 Summit in Gleneagles, UK. It was a summit participated by prospective young representatives from each member country of G8 to discuss on related topics along with the G8 Summit and compile a final report.
After a short break from 2009, Junior Summit was resumed in relation to 2015 G7 Summit in Schloss Elmau, Germany. Participants included Japanese students.
Upon hosting 2016 Ise-Shima Summit in Mie Prefecture, the Japanese Government announced to convene Junior Summit to be organized by MOFA, prior to G7 Summit.

Focusing on the main theme of Junior Summit, "The Planet for the next generations: the environment and sustainable society", participants actively shared their ideas and opinions during the conference from April 22 to 24.
Participants were divided into 4 working groups by each sub theme. The outcome of the discussion was compiled in “Kuwana Junior Communique”.
The result of discussion was presented in Kuwana in the presence of Mrs. Akie Abe, the spouse of Prime Minister, Mr. Eikei Suzuki, Governor of Mie prefecture and Mr Narutaka Ito, Mayor of Kuwana city.
The main issues discussed were as follows.

(1) Climate Change and Decarbonisation
In order to solve various problems derived from climate change, it was emphasized the significance of promoting carbon pricing by utilizing carbon taxes, emissions trading schemes and encouraging renewable energy generation. In addition, they discussed on measures to mitigate greenhouse gases via urban green infrastructure development . Japanese Government is expected to take a stronger leadership on combatting climate change.
(2) Economic Inequality and Inclusive Growth
In order to reduce economic inequality between developed countries and developing countries, participants exchanged ideas and opinions to find possible measures to improve the situation. They focused on the possibilities to provide incentives for firms of developed countries in order to activate technology transfer from developed to developing countries.
The issues of corruption and tax evasion were also picked up for the discussions. They proposed the necessity for a system reform to improve the situation.
(3) Human Capital Development
In order for every child to access to primary and secondary education, the importance of international cooperation was highlighted. It includes sharing resources and information in terms of education between schools in developed countries and that of developing countries, which leads to improvement of the quality of educational infrastructure, job-training system for teachers.
(4) Overcoming Gender Inequality
In terms of empowerment of women, in which Japanese Government is expected to play a leading role, proposals were made to create a society where all women are actively engaged. It included introduction of a scoring system to quantify and visualize the working condition of each enterprise, and the reform of educational infrastructure to enhance basic education for women in the developing countries, including financial support.

During the Summit period, participants were invited to visit local and metropolitan places to experience authentic Japanese culture. They also hadinteractive activities with peers in Mie and in Tokyo.

Participants and chaperones paid a courtesy visit to Prime Minister Shinzo Abe, on April 27 in Tokyo. The outcome of the Junior Summit was presented and representatives of Junior Summit handed in the ” Kuwana Junior Communique” to the Prime Minister.
In response to the Communique, Prime Minister Abe mentioned that he would like to deliver positive and comprehensive messages to contribute for tackling the tasks to achieve sustainable, global economic growth as presidency of coming G7 Summit.
He also mentioned the importance of involvement of young generations in this field, hoping them to keep paying great attention on global issues and trying to pursuit for ideal international community.