The Launch Event for the Quad Fellowship 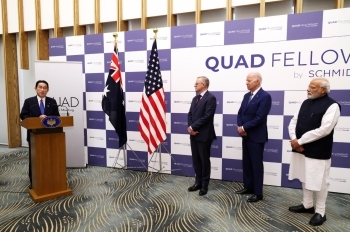 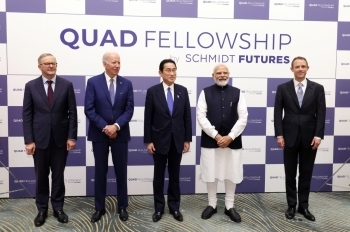 On May 24, the Launch Event for the Quad Fellowship was held at the Prime Minister's Office, following the 4th Quad Leaders’ Meeting.

The Quad Fellowship was announced at the 2nd Quad Summit (September 24, 2021) as an educational and people-to-people exchange cooperation program, and today its establishment was officially declared at the launch event.

The fellowship awards 100 scholarships for master's and doctoral degrees in the U.S. for outstanding individuals in STEM fields (science, technology, engineering, and mathematics) from four countries: Australia, India, Japan and the United States. Schmidt Futures operates and administers the program.

At the event, Prime Minister Kishida officially declared the establishment of the Quad Fellowship, and stated that human wisdom is the foundation of a prosperous society. He also called on young students and researchers carrying forward our hopes for the future to actively take part in this promising Quad Fellowship, and expressed his expectations that the Fellowship would become a “bridge” connecting the four countries, and would be the driving force for growth, helping to resolve issues arising in the Indo-Pacific region and around the world.