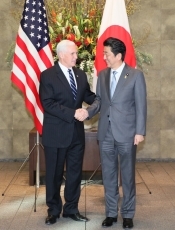 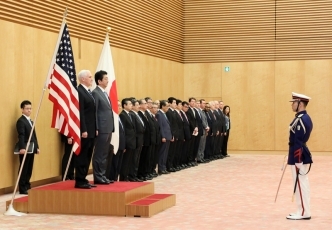 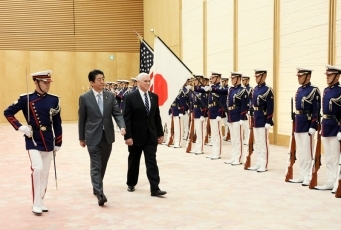 Photo: Cabinet Public Relations Office
On February 7, Prime Minister Abe received a courtesy call from the Honorable Mike Pence, Vice President of the United States of America. Commencing around 3:05 p.m. for approximately 50 minutes, small-group meeting was held and North Korean issues were mainly discussed. Then, commencing around 4:00 p.m. for approximately 1 hour, expanded bilateral meeting was held and the regional issues including North Korea were discussed. After the courtesy call, Vice President Pence and Prime Minister Abe conducted Joint Press Announcement, and commencing around 5:45 p.m. for approximately 1 hour and 20 minutes, Prime Minister Abe and his wife Akie held a banquet. The overview of the courtesy call is as follows.

The two sides welcomed the inter-Korean dialogue in connection with the Pyeonchang Olympics and agreed to continue to apply maximum pressure on North Korea toward the goal of denuclearization of the Korean Peninsula.

Both sides shared the recognition that meaningful dialogue cannot be expected unless North Korea shows sincere will and concrete actions toward denuclearization.

Vice President Pence reiterated U.S. position that all options are on the table, and Prime Minister Abe reaffirmed his support for this U.S. position.

Both sides affirmed the recognition that Japan and the U.S. as well as Japan, the U.S. and ROK trilaterally will work closely in order to make North Korea change its policy.

The two sides expressed concern about the situation in the East and South China Seas and agreed to continue to cooperate together. Both sides affirmed that Article 5 of the Japan-U.S. Security Treaty covers the Senkaku Islands.

The two sides affirmed that they will cooperate to promote a rules-based order, connectivity, and peace and security in the region to realize a free and open Indo-Pacific.

The two sides reaffirmed the U.S. commitment to Japan's defense through the full range of U.S. military capabilities, both nuclear and conventional.

Both sides affirmed that they would further promote the Japan-U.S. security cooperation.

Both sides shared the importance of mitigating the impact on Okinawa and reaffirmed their commitment to the realignment of the U.S. forces in Japan (USFJ), including the relocation of Marine Corps Air Station (MCAS) Futenma to Camp Schwab (Henokosaki).

Both sides confirmed to strengthen comprehensive space cooperation, including security, industry and science and technology.