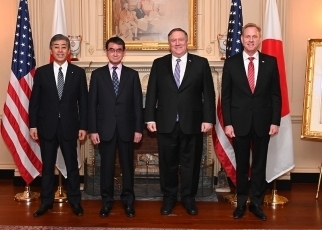 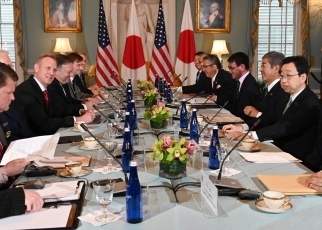 On April 19, commencing at 8:45 a.m. (U.S. time) for approximately one hour, the Japan-U.S. Security Consultative Committee (SCC) (Japan-U.S. “2+2”) was convened in Washington, D.C., the United States of America. The meeting was attended by Mr. Taro Kono, Minister for Foreign Affairs, and Mr. Takeshi Iwaya, Minister of Defense, from the Japanese side, and the Honorable Mike Pompeo, Secretary of State, and the Honorable Patrick Shanahan, Acting Secretary of Defense, from the U.S. side. The overview of the meeting is as follows (following the meeting, a Joint Statement(PDF)

The four ministers exchanged candid views regarding the security environment in the Indo-Pacific region, and expressed serious concern about, and strong opposition to, unilateral coercive attempts to alter the status quo in the East China Sea (ECS) and South China Sea (SCS). The four ministers reaffirmed their determination to work together to safeguard the peace and stability of the ECS, and reconfirmed that Article V of the Japan-U.S. Security Treaty applies to the Senkaku Islands and that both nations oppose any unilateral action that seeks to undermine Japan’s administration of these islands.

The four ministers shared the view that they will steadily implement the realignment of U.S. forces in Japan, from the perspective of mitigating the impact on local communities including Okinawa, while maintaining the deterrence of the Japan-U.S. Alliance. In particular, the four ministers welcomed the significant progress on the construction of the Futenma Replacement Facility (FRF) and reaffirmed that the relocation of Marine Corps Air Station (MCAS) Futenma to Henoko is the only solution that avoids its continued use. Foreign Minister Kono conveyed to the U.S. side that it is important to mitigate the impact on the local people, including making progress, one by one, on the issues surrounding the operation of U.S. forces and the Status of Forces Agreement (SOFA), while steadily implementing the realignment of U.S. forces. Defense Minister Iwaya requested the U.S. side to minimize the impact of the operation of U.S. forces on local communities, including noise of transient aircraft. The two ministers also requested the U.S. side to prevent incidents and accidents.