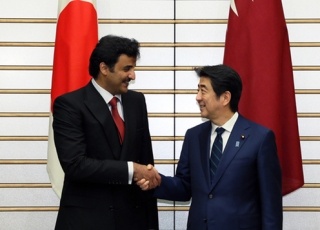 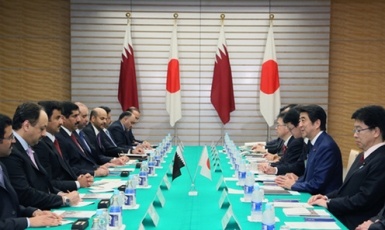 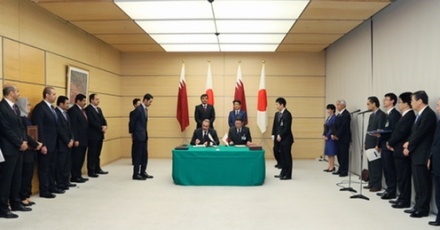 1. In his opening remarks, Prime Minister Abe reiterated his gratitude to Qatar for its expression of sincere condolences and strong solidarity with Japan at the time of terrorist incident regarding the murder of Japanese nationals, and emphasized the necessity of stopping extremism by all means. He asserted that following this painful incident, Japan’s determination to achieve stability in the Middle East became stronger than ever, and that Japan would steadfastly fulfill its role in non-military contribution as a responsible member of the international community by expanding its humanitarian assistance such as food and medical care. He stated that Japan would fully utilize its strength to contribute in achieving a vibrant and stable society in the spirit of “the best way is in the middle.”

2. In response, H.H. Sheikh Tamim expressed his condolences on the recent terrorist incident regarding the murder of Japanese national. He said that the Muslims were neither terrorists nor criminals and asserted his strong intention to cooperate hand in hand with Japan in countering terrorism. He welcomed Japan’s positive engagement in the Middle East and highly appreciated Japan’s assistance to Palestine, Syria, Iraq and other inflicted areas, and also praised the role played by Japan in counter-terrorism.

3. Prime Minister Abe expressed his intention to further enhance the frameworks of the political dialogue and the security dialogue with Qatar and his hope that the current cooperative relationship between the two countries would be further expanded, on which H.H. Sheikh Tamim agreed.

4. Both sides welcomed the participation of Japanese companies in various projects in Qatar in such fields as urban railways and healthcare, and shared the hope for further promoting the cooperation in the field of private-sector business as well.

5. Both sides also exchanged views on issues of the Middle East and the international community.

On the occasion of the visit of H.H. Sheikh Tamim to Japan, the Joint Statement on Promoting and Expanding Cooperation under the Comprehensive Partnership between Japan and the State of Qatar (English text (PDF)

Page Top
Back to Japan-Qatar Relations