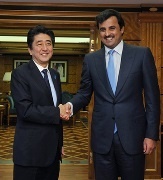 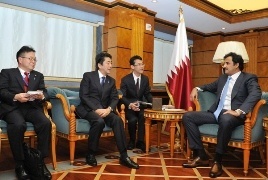 Photo: Cabinet Public Relations Office
On September 25, commencing at 3:40 p.m. for approximately 20 minutes, Prime Minister Shinzo Abe held a Japan-Qatar Summit Meeting with H.H. Sheikh Tamim bin Hamad Al Thani, the Amir of the State of Qatar, at the Permanent Mission of the State of Qatar to the United Nations. The overview of the meeting is as follows. (The meeting was attended on the Qatari side by Minister of Foreign Affairs H.E. Dr. Khalid bin Muhammad Al-Attiyah, among others, and on the Japanese side by Deputy Chief Cabinet Secretary Hiroshige Seko, Special Advisor to the Prime Minister Eiichi Hasegawa, and Tsukasa Uemura, Director-General, Middle Eastern and African Affairs Bureau, among others).

Prime Minister Abe said he was pleased to meet H.H. Sheikh Tamim again, and is delighted that bilateral relations have steadily strengthened in various fields, including education and science, security and the space industry since his visit to Qatar in August last year. H.H. Sheikh Tamim replied that he is pleased to meet again, and said bilateral relations are advancing in various fields since Prime Minister Abe's Qatar visit last year.

Prime Minister Abe said that he would like H.H. Sheikh Tamim to participate in the third UN World Conference on Disaster Risk Reduction, which will be held in Sendai in March next year. Prime Minister Abe also expressed his gratitude for stable energy supplies and said that stable supplies of LNG at competitive prices are important. In response H.H. Sheikh Tamim said he wants to develop investment and economic relations with Japan in various fields, and indicated he wants to substantially promote investment in Japan. Additionally, he said Qatar's energy relationship with Japan is a permanent one and he wants to further strengthen solid relationships, including in the security and defense fields.

Prime Minister Abe explained that the Government of Japan has decided to provide 25.5 million US dollars toward humanitarian support for Iraq and support for neighboring countries, as a measure for countering ISIL. The two leaders also exchanged views on regional affairs, including ISIL and the recent situation in Iraq.