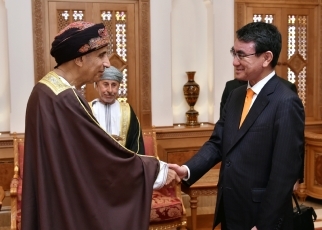 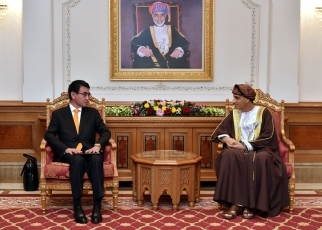 On Wednesday, December 27, Mr. Taro Kano, Minister for Foreign Affairs, who is visiting Muscat, Oman, paid a courtesy call on H.H. Sayyid Fahd bin Mahmoud bin Mohammed Al Said, Deputy Prime Minister for the Council of Ministers, Sultanate of Oman. The overview of the meeting is as follows.

1. In the beginning, Deputy Prime Minister Fahad welcomed Minister Kono’s visit to Oman, and Minister Kono mentioned that he would like to strengthen the bilateral relationship in various fields, adding that he especially would like to further deepen the relation in the field of economy. Deputy Prime Minister Fahad replied that he wished that the relationship with Japan would be enhanced in wide areas by this visit.

” that Japan is promoting, saying that he wishes to cooperate with Oman which is strategically located with regard to this Strategy. Deputy Prime Minister Fahad expressed his support for this Strategy.

3. Furthermore, they exchanged views on the situation in the Middle East including the Qatar issue.

Page Top
Back to Japan-Oman Relations