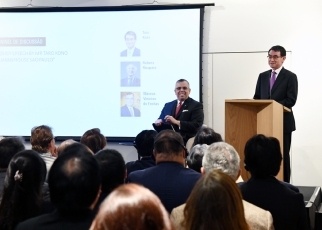 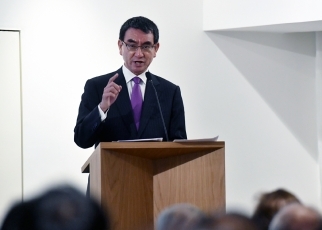 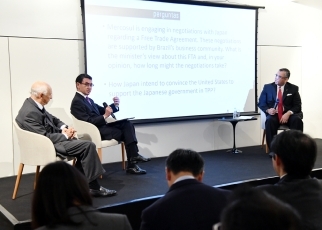 It is my great honor to speak here at the Japan House in Sao Paulo today. This is my first visit to Latin America, both personally and as Foreign Minister.
From here I will go to Buenos Aires this afternoon for the G20 Foreign Ministers’ Meeting. The Foreign Minister of Argentina called me last week about this G20 meeting, and at the end of the conversation he said he was looking forward to my visit so much because my visit would be the first one in 24 years by a Foreign Minister of Japan.
And he added “it’s funny the name of the last Japanese Foreign Minister who visited Argentina was also Kono, just like yours.”
I had to say “Minister, of course it is Kono. He is my father.” One Foreign Minister’s visit in one generation! We must do better than that. I am asking Finance Minister to buy me an airplane so that I can fly around. It could be small but must be able to fly long distance.
My father also came to Brazil, but I am relieved to say my immediate predecessor Mr. Kishida also visited Brazil. So it’s not the first time in 24 years. My father came back to Brazil once again accompanying Their Majesties the Emperor and the Empress. After the trip, my father told me how enthusiastically Their Majesties were received in Brazil. We really appreciate it, and I am very happy to know that Her Imperial Highness Princess Mako is planning to visit Brazil for the celebration of the 110th anniversary of Japanese immigration to Brazil.
On Thursday last week I welcomed your Foreign Minister, His Excellency Mr. Aloysio Nunes Ferreira, into my office and we had lunch together. I guess he already has his own airplane. We affirmed our commitment to the bilateral relationship and closer cooperation between Japan and Brazil.

Ladies and gentlemen,
We celebrate the 110th anniversary of Japanese immigration to Brazil this year. Today, 1.9 million Japanese-Brazilians live in Brazil, while 180 thousand Brazilians live in Japan. During my conversations with young Japanese-Brazilians last night, I was most impressed by their active role in this country and their pride in both being Brazilian and also having roots in Japan.
We never forget that your trust towards Japan is based on the constant contributions of those Japanese immigrants and their Nikkei descendants to the local communities in this country. We are very appreciative of that.

That is why Japan opened the first-ever Japan House in the world one year ago here in Sao Paulo. We hope it serves as a bridge that connects our two countries which are located on opposite sides of this planet, separated by a 24 hour flight. I came via Dubai, and actually it took 27 hours. This Japan House welcomed over 770 thousand visitors since its opening. I just went upstairs and checked the number. It’s actually 789 thousand today. Japan House provides opportunities for everyone to be acquainted with Japan’s charming features, as well as its contribution to the world.

So now, I would like to take this opportunity to share and exchange our views on global challenges and Japan’s efforts to address them, as well as the new stage of collaboration with Latin America and the Caribbean countries.
The Latin America and the Caribbean region and Japan share fundamental values such as democracy, rule of law, human rights and market economy.
The liberal international order based on these common values led to the peace and prosperity of today’s world.
Yet this international order is now faced with some serious challenges, and the foundations of development and prosperity are being undermined today.
We believe that economic growth will enhance democracy in a country. Japan has made contributions to the world through government assistance based on this premise. The world has seen tremendous economic growth recently, but unfortunately, the number of democratic countries are not on the rise at the same rate.
We are now watching populists and extremists taking over the political scenes all over the world and, in some countries, new dictators taking over the government for their own good.
I still have faith that real market economy leads to democracy as the middle class it creates will eventually crave for political freedom.
But the state capitalism would not. State capitalism creates a new class whose success has depended on their connection with the existing government. If your success is tied to the existing system or government, why would you demand democracy or free election which might lead to a change in government?
We need to work together so that we can keep the flag of democracy high and waving.

I came to the Parliament back in 1996. And back then, Japan was still trying to build a wall around itself to protect its agriculture and other weak industries. I still remember we had a free trade negotiation with Singapore. Because Singapore is so small and has almost no agriculture, we thought it would be a good partner for our first free trade negotiation. But someone accidentally found out that Singapore has a goldfish industry. Oh no, it could be a threat to our goldfish industry. So, tiny, tiny goldfish delayed our negotiation of free trade for six months.

It has been twenty years since then, and Japan went through two decades of economic downturn and deflation. We learned lessons the hard way, and now Japan is calling on the world to protect the free trade.
Japan and the United States, together with likeminded countries, set out to create a new international order for trade and investment and other economic rules fit for the 21st century in Asia-Pacific. It was also to create a new strategic order in the region.
The Abe government and the ruling Liberal Democratic Party spent big political capital to convince farmers and some industries that we could no longer close our economy if we want to increase the productivity of the country.
It was very shocking to us when the Trump Administration decided to make a U turn, but the eleven other countries were determined to spread the gospel of free trade in the Asia-Pacific.
TPP 11 will enter into force soon. Although its name is “Trans-Pacific” partnership there is no regional requirement in the treaty. We may have to change its name from “Trans-Pacific” to “Trump-Pacific” in order to get the US back to the treaty, but the United Kingdom is already showing its interest to join the TPP11. So, I would like to welcome Brazil and the other Latin American and Caribbean countries to join the TPP.

We are now talking to the United States about how we all need to stand firm with the WTO, which has been the cornerstone of the free trade regime. It is also true that the WTO needs some mending and updating, such as e-commerce and intellectual property rights, I am sure we can work it out.
Although protectionism and inward-thinking tendencies are still seen in places, Japan will remain unwavering in its belief that a free and open international economic system assures the prosperity of the world.
It is true that the advancement of economic globalization and innovation has brought about social discontent and anxiety due to expanding inequality. But dictatorship, populism, extremism or protectionism can never be real answer to that.

The commercial relationship between Japan and Latin America and the Caribbean countries have been expanding remarkably in recent years. The number of Japanese business establishments in the region has nearly doubled in the last 5 years, which has contributed to the strong global supply chains of Japanese corporations.
Latin America is situated in a strategic location for marine transportation, including the Panama Canal and the Strait of Magellan. Both LAC countries and Japan enjoy the blessings of the ocean. We need to work together to maintain the free and open maritime order based on universally recognized principles of international law, including those reflected in the United Nations Convention on the Law of the Sea (UNCLOS).
Japan is now trying to maintain free and open maritime order based on the rule of law from the east coast of Africa to the west coast of North and South Americas through the Middle East, Indian subcontinent, ASEAN countries, the Pacific Island Countries, Australia and New Zealand.
We aim to ensure stability and prosperity of the international community by making a free and open Indo-Pacific as global commons, through for example, increasing connectivity with high quality infrastructure, and capacity building for law enforcement, counter-terrorism and disaster management. Japan is open to cooperate with any country if we can share this vision.
If Latin America and Asia have a stronger connection, there will be different opportunities and possibilities.
We expect your strong support and cooperation.

The history of cooperation between Japan and LAC countries shows a model of sustainable development.
For example, PRODECER, a joint project between Japan and Brazil started in 1979, developed “Cerrado” in the Brazil’s mid-west into the largest agricultural region in the southern hemisphere, transforming Brazil into a grain belt for soybeans. This so called “Miracle of the Cerrado”, which contributed not only to social and economic development in Brazil but also to global food security.
Well, it doesn’t stop there. Today, the spirit of sustainable development is expanding beyond this continent. Japan and Brazil together are now promoting sustainable development in other countries, such as Mozambique and Angola, providing knowledge from our shared experience. We expect that our partnership will play a more active role for the development of the rest of the world.

A stable security environment is the foundation of our prosperity. Coping effectively with actual threats is any governments’ utmost concern.
North Korea's nuclear and missile development is a common threat to peace and security of the international community. Japan welcomes North Korea’s intention towards complete denuclearization, which was confirmed at the Inter-Korean Summit last month.
But, there is still a long way to go before achieving our common goal of North Korea’s so called CVID; complete, verifiable, and irreversible dismantlement of all weapons of mass destruction (WMD), including biological and chemical weapons, ballistic missiles of all ranges, and its related facilities.
A US-South Korean joint military exercise was started on May 11, and North Korea certainly knew it. On May 15 North Korea accepted an offer from the South Korean government to hold another round of ministerial talk and proposed to hold it the next day, only to cancel the meeting early next morning citing the US-Korean joint military exercise. So North Korea is already starting playing game.
In order to urge North Korea to take concrete actions toward our goal through the upcoming US-North Korea Summit next month in Singapore, we have to maintain pressure against North Korea through the economic sanctions based on the UN Security Council Resolutions, and must not make a mistake on the timing of easing sanctions.

Next year, Japan will take over the presidency of the G20 from Argentina, and Chile will host APEC. We can assume Japan and Latin America and the Caribbean will play bigger roles and cooperate more and more in the international arena.
Japan and LAC countries are entering into a new stage of collaboration. To address global issues, we pursue the networking of like-minded nations. Again, I call for partnership with LAC countries, including the regional and sub-regional organizations, such as Mercosur, the Pacific Alliance, CARICOM and SICA.

Based on the common values we share and our long-lasting friendship of over 100 years, Prime Minister Shinzo Abe, during his visit to Latin America in 2014, announced three guiding principles for cooperation with Latin America and the Caribbean, composed of “progredir juntos”, “liderar juntos” and “inspirar juntos”.
We would like to expand our relationship on these “juntos!!”.
Finally with my promise that Japan’s Foreign Minister will visit Brazil more often and regularly, I conclude my speech with thankfulness and hope for our future relationship.

(Open a New Window)
Page Top
Back to Japan-Brazil Relations