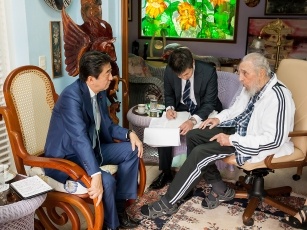 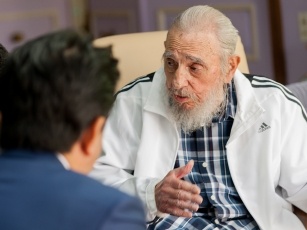 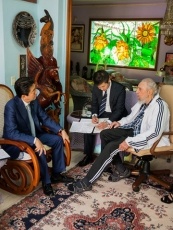 On Thursday, September 22, Mr. Shinzo Abe, Prime Minister of Japan, had a meeting with H.E. Mr. Fidel Castro Ruz, former President of the Council of State of the Republic of Cuba, at former President Castro’s residence in Havana City. The overview is as follows.

(2) In response, former President Castro welcomed this visit to Cuba by Prime Minister Abe, the first such visit by a sitting Japanese Prime Minister, and explained that he has a great deal of respect for Japan, stating that he is impressed by the contributions Japan makes to the world through its efforts in various fields.

(1) Prime Minister Abe explained that North Korea is repeatedly going ahead with nuclear tests and ballistic missile launches, which represents an unprecedented level of threat to the peace and stability of the international community, and he pointed out that a stern response is required. Prime Minister Abe requested Cuba’s cooperation and understanding to promptly resolve the abductions issue.

(2) Former President Castro mentioned the horror of nuclear weapons, and explained that the tragedies of Hiroshima and Nagasaki are widely talked about in Cuba and the two countries share recognition on realizing a world without nuclear weapons.