(3) H.E. Dr. the Hon. Chelston Brathwaite, Ambassador of Barbados to the People's Republic of China

(4) H.E. Picewell Forbes, Ambassador to CARICOM of Commonwealth of The Bahamas

The other points of each meeting are as follows: 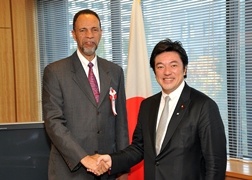 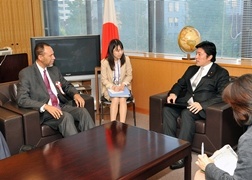 (1) State Minister Nakayama stated that he appreciated the CARICOM Secretariat for their coordination in preparing for the Japan-CARICOM Ministerial-Level Conference, and that since exchanges have become active during the Japan-CARICOM Friendship Year, he would like to maintain this momentum in the future and to continue to cooperate with the CARICOM Secretariat in the international arena.

(2) Expressing his gratitude to Japan for hosting the conference, Assistant Secretariat Granderson stated that the importance of Japan-CARICOM relations had significantly increased since Prime Minister Shinzo Abe’s visit to Trinidad and Tobago last July and that he would like to further strengthen the relationship with Japan, an important partner of CARICOM’s with which it shares its fundamental values. Moreover, Assistant Secretariat Granderson stated that the success of the Ministerial-Level Conference was due to the cooperation between Japan and CARICOM and added that he would cooperate with Japan not only on issues related to Japan-CARICOM relations, but also on global issues.

The Commonwealth of Dominica 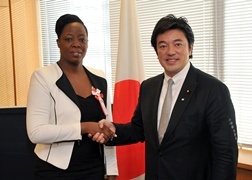 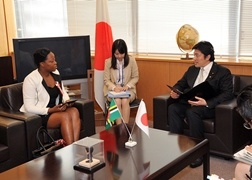 (1) State Minister Nakayama stated that he hopes that the Commonwealth of Dominica makes good use of such projects signed in the area of disaster risk reduction and climate change. State Minister Nakayama also stated that a survey for a project on the maintenance of equipment in the field of fishery was in its final stage and the aim was for an early implementation of the project, and also added that Japan would continue providing support to overcome the vulnerabilities of small island states.

(2) Permanent Secretary Prevost stated that since the establishment of diplomatic relations with Japan, two countries have been building a friendly and cooperative relationship, and that the Commonwealth of Dominica has been supporting Japan in the international arena. Moreover, expressing her gratitude for the various support from Japan, such as in the fields of environmental disaster risk reduction, fishery, dispatching of volunteers, and technical cooperation, Permanent Secretary Prevost expressed her hopes for Japan’s cooperation in the field of renewable energy. 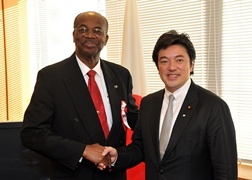 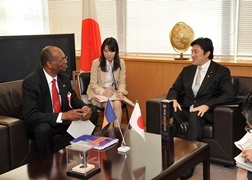 (1) In view of Prime Minister Abe’s statement in the Japan-CARICOM Summit Meeting in July, that support from perspectives other than those based on per-capita income would be important, State Minister Nakayama stated that surveys in the field of renewable energy/energy saving had been conducted and a survey on disaster risk reduction would soon be implemented, and added that future cooperation would be discussed on the basis of such surveys.

(2) Ambassador Brathwaite stated that Barbados has long appealed to other countries about the vulnerabilities of small island states and for that highly appreciated Japan’s support policy from perspectives other than income level. Ambassador Brathwaite also expressed his gratitude for Japan’s past support of CARICOM states, which are vulnerable to natural disasters, in the fields of disaster risk reduction and human resource development. Moreover, Ambassador Brathwaite asked for understanding and cooperation from Japan concerning the issues facing small island countries, such as access to concessional funds. 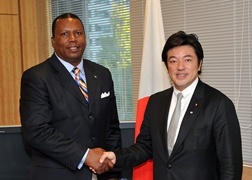 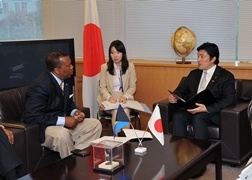 (1) State Minister Nakayama stated that he welcomes the arrival of the next Ambassador of the Commonwealth of The Bahamas to Japan. He said that The Bahamas, to which Mr. and Mrs. Abe went on their honeymoon, is a developed country in terms of tourism and that he expected The Bahamas to communicate the attraction of the Caribbean area to the world, and that he would cooperate with The Bahamas for the improvement of safety in the field of maritime affairs and environmental protection.

(2) Ambassador Forbes stated that the bilateral relationship between Japan and The Bahamas has traditionally been good and that he would like to increase the number of tourists from Japan in the future and for that purpose, he wanted to obtain support for Japanese language education and youth exchanges in The Bahamas. Ambassador Forbes also stated that he welcomed Japan’s efforts for strengthening its relationship with the CARICOM states, and that as The Bahamas consists of 700 islands, while the national income level is high numerically, these islands in general have very small populations are isolated lacks sufficient infrastructure and as such face many development challenges, and therefore he hoped for support from Japan.

St. Vincent and the Grenadines 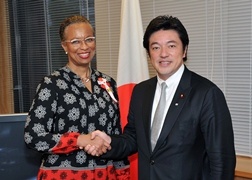 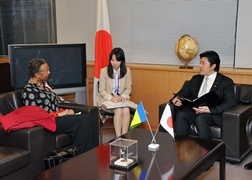 (1) State Minister Nakayama conveyed the fact that in September the Government of Japan had signed off on two Notes of Exchange, a project concerning equipment maintenance in the field of fishery (JPY 486 million), and a project to provide equipment for reconstruction and disaster risk reduction (JPY 100 million), and he hoped that the Government of St. Vincent and the Grenadines would utilize them, together with a project for dealing with climate change that the Government of Japan had signed off on at the end of July for reconstruction following the torrential rain at the end of last year and the development of economic society. At the same time, State Minister Nakayama also stated that he would continue to implement support to help overcome the vulnerabilities of small island states.

(2) Permanent Representative King expressed her gratitude for Japan’s support, particularly support following the damage caused by the torrential rain at the end of last year, which amounted to 15% of the country’s GDP, and stated that the fishery facility constructed through support from Japan, locally as “Little Tokyo,” plays an important role economically. Permanent Representative King also stated that Japan was an important partner of St. Vincent and the Grenadines in the international arena and that she supported Japan’s stance concerning the reform of the United Nations Security Council and the utilization of living marine resources on the basis of a scientific perspective. 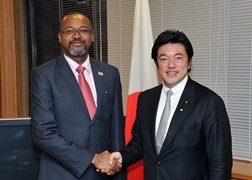 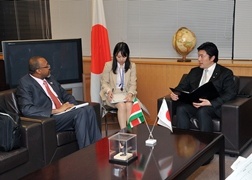 (1) State Minister Nakayama welcomed the first-ever Ambassador of the Republic of Suriname to Japan and stated that the Government of Japan had been implementing cooperation for disaster risk reduction and the environment to Suriname, and that Japan had decided to newly provide ambulances as support in the field of medical care following a request in July from H.E. Robert A. L. Ameerali, Vice-President of the Republic of Suriname. State Minister Nakayama also stated that he would continue to provide support to help overcome the vulnerabilities of small island states.

(2) Ambassador Pinas stated that Suriname supported Japan as a responsible partner for cooperation and expressed his satisfaction with the fact that there had been continuous high-level exchanges between the two countries, such as a visit to Japan by Mr. Jim Hok, Minister of Natural Resources, last March. At the same time, Ambassador Pinas stated that Suriname was highly interested in protection/maintenance of forests, and from such a perspective, was interested in acquiring knowledge from and cooperating with Japan. Ambassador Pinas also expressed gratitude for Japan’s cooperation in the fields of fishery and medical care and expressed his further hopes for Japan. 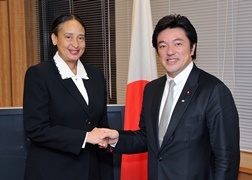 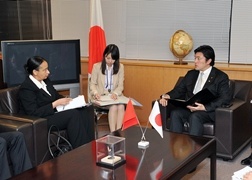 (1) State Minister Nakayama expressed his gratitude for the warm welcome given to Prime Minister Abe upon his visit to Trinidad and Tobago last July on the occasion of the 50th anniversary of the establishment of diplomatic relations between the two countries, and stated that in view of Prime Minister Abe’s statement in the Japan-CARICOM Summit Meeting in July announcing that perspectives other than per-capita income are important, surveys in the field of renewable energy/energy saving had been conducted and that future cooperation would be discussed on the basis of such surveys.

(2) Acting Permanent Secretary Seignoret stated that the Government of Trinidad and Tobago was honored to have hosted Prime Minister Abe’s visit last July, that she attached great importance to investment by Japanese enterprises, and that she hoped for an expansion of investment from Japan in various fields. Acting Permanent Secretary Seignoret added that she looked forward to cooperation and sharing of knowledge with Japan in the field of security, particularly measures against illegal drugs, and also stated that since she was impressed by Japan’s response capabilities that enabled it to overcome the financial crisis and the Great East Japan Earthquake, she hoped Japan would share its experiences in the Third World Conference on Disaster Risk Reduction to be held in March next year in Japan.

(* The foregoing is a provisional translation. The date indicated above denotes the date of issue of the original press release in Japanese.)
Page Top
Back to Japan-CARICOM Relations